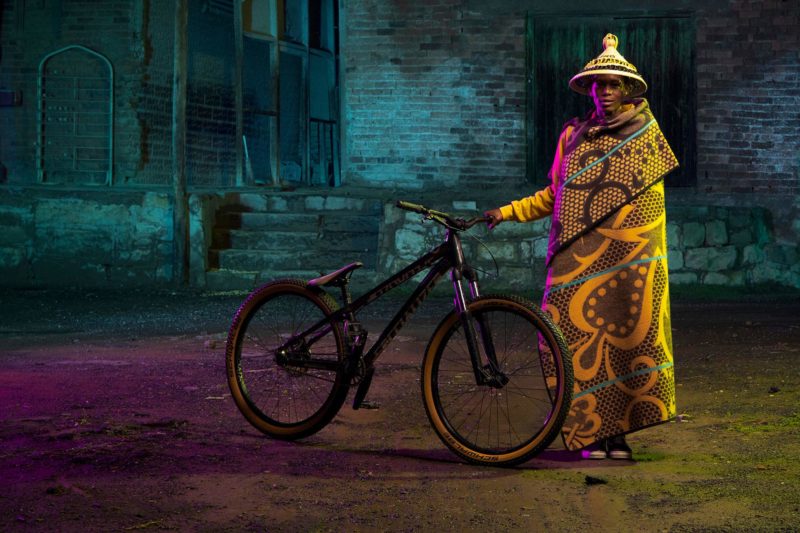 Just a few years ago, Pump For Peace built a pumptrack in Khothalang Leuta’s hometown of Roma, Lesotho – a mile high in the small landlocked country near the southeastern tip of Africa. In the ensuing years, Leuta taught herself how to ride it, got faster than everyone else in the village, and earned herself a shot to compete at the Red Bull UCI Pump Track World Championships in Lisbon.

Khothalang Leuta: ‘The Fastest Girl in the Village’ pump track 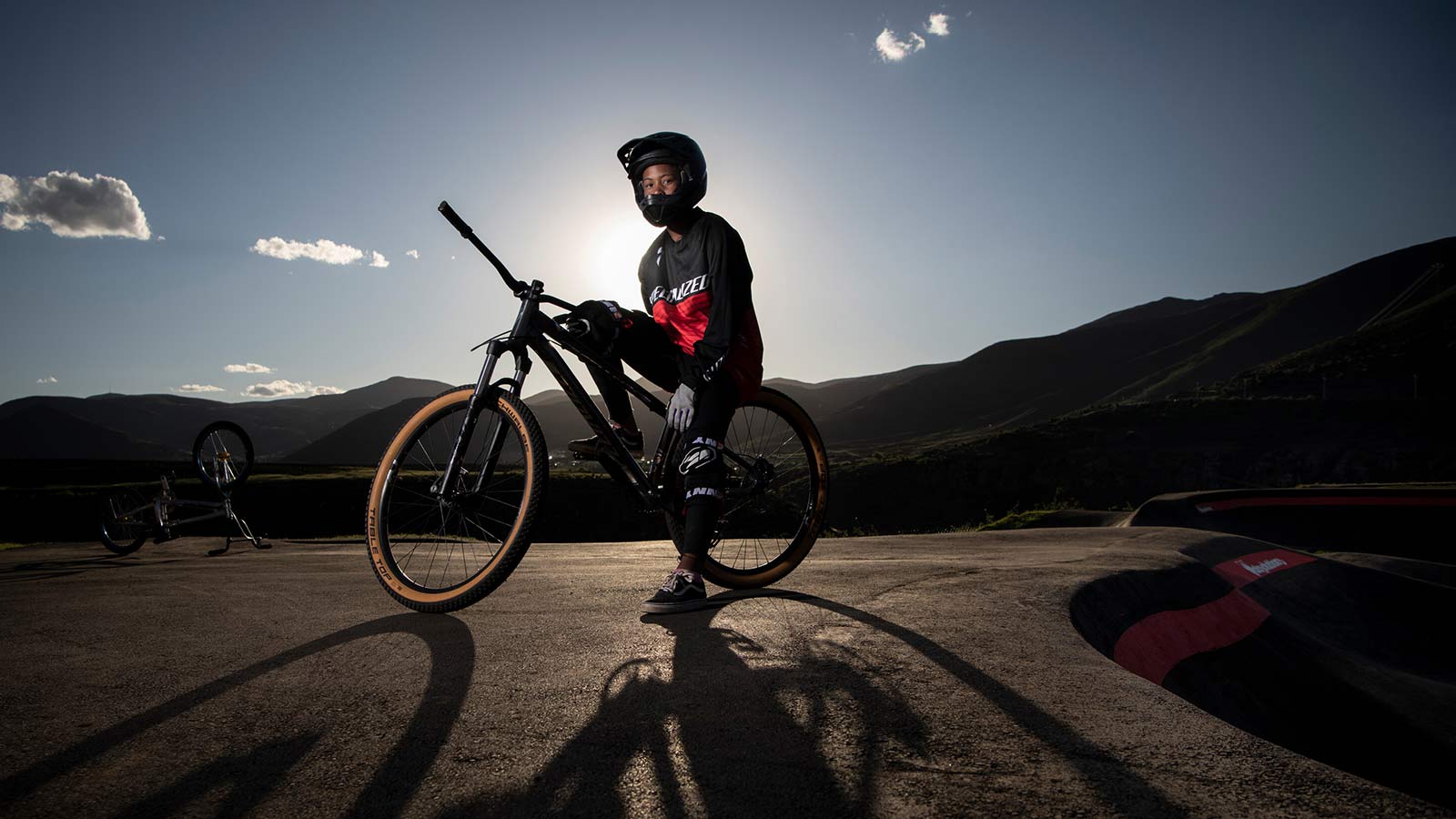 Looking back on some fun Red Bull stories that slipped past me in 2021, I stumbled on the tale of 18-year-old Khothalang Leuta, aka ‘The Fastest Girl in the Village’. We’ve seen Pump Track Worlds pop up over the past few years as Red Bull support made pumptrack racing global, earning it a UCI title. But apparently, I’d also missed the Pump For Peace initiative, building pump tracks in unexpected places and inspiring riders who might not otherwise take up bike riding for sport.

And that’s how Leuta got her racing start in Lesotho. 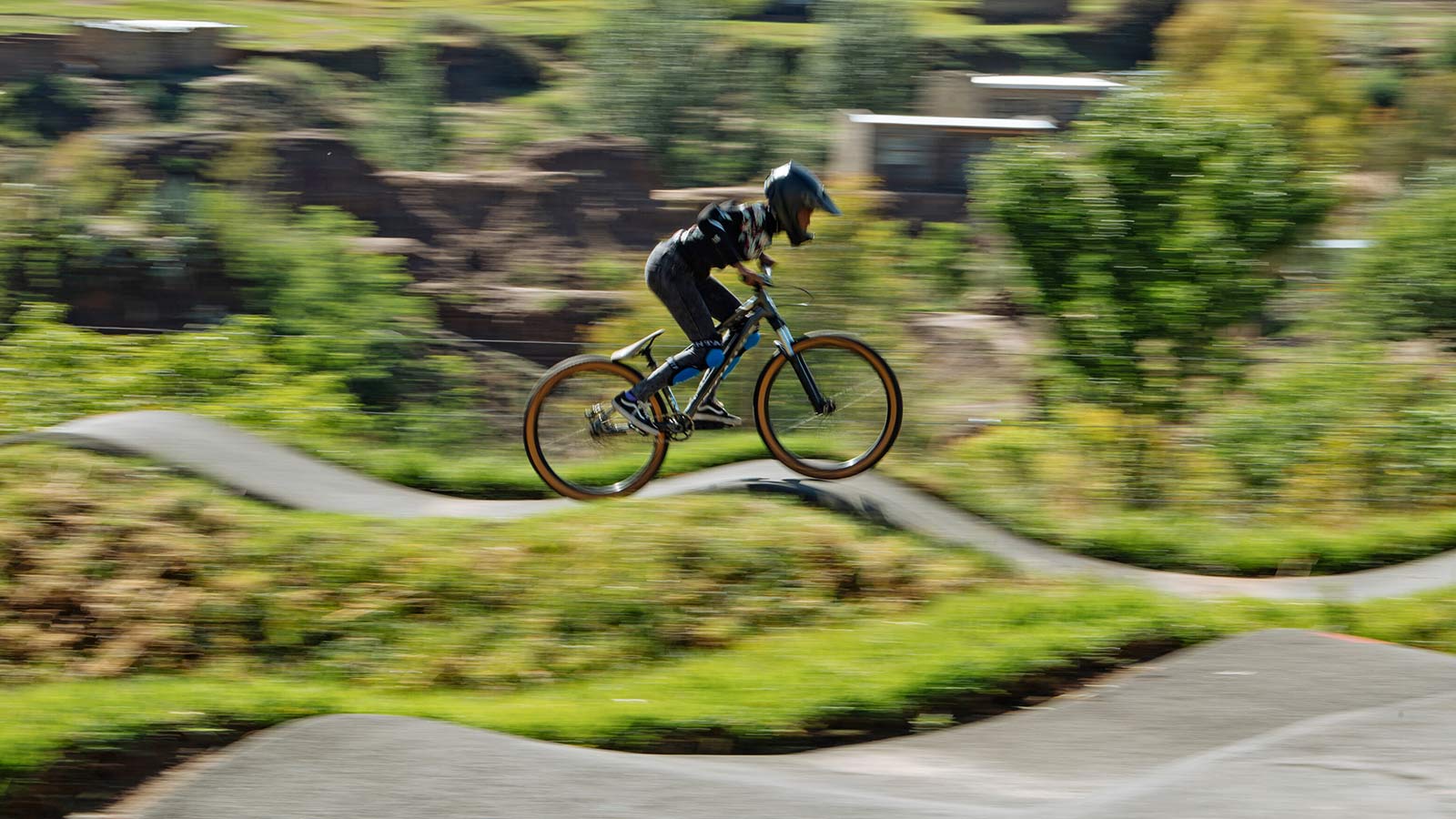 Having ridden bikes since age 7, she said she was always the fastest girl in her village. But when the Velosolutions Pump For Peace pump track was done it gave her an outlet to boost her self-confidence, riding the shared bikes of the local club at the track, and then becoming “faster than the boys in her village”, too. 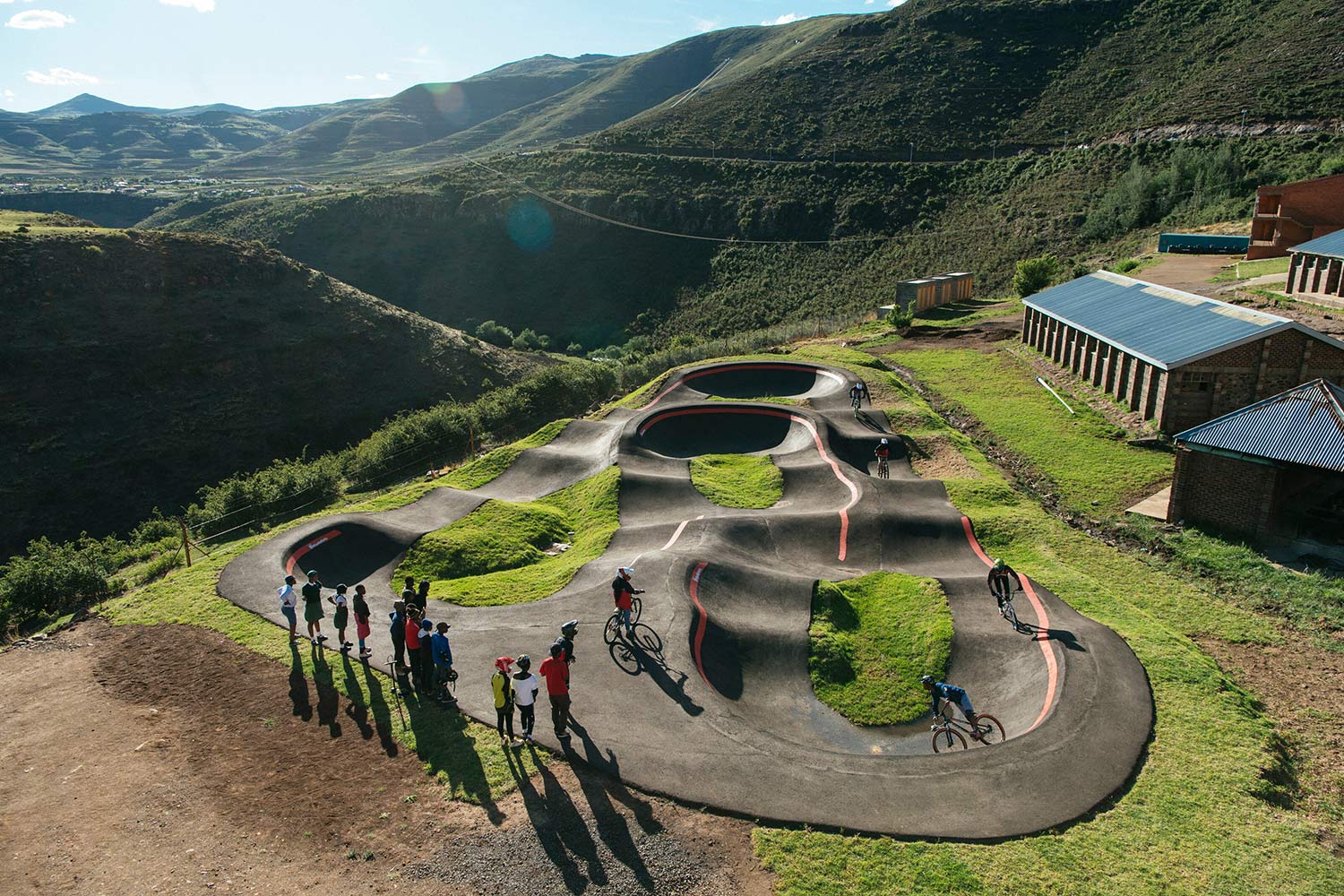 Telling her story, Red Bull says, “it’s not typical to see women riding bikes in Lesotho, but since a pump track was built in 2017 in her hometown, Leuta was entranced.” She said, “I was the first girl to ride the pump track in the village, but now I’m faster than the boys. I let my riding do the talking.”

Leuta won key Red Bull-hosted national races on her home track in 2019 & 2020 that earned her entry to compete at Worlds in 2020, but a global pandemic had other things in mind. 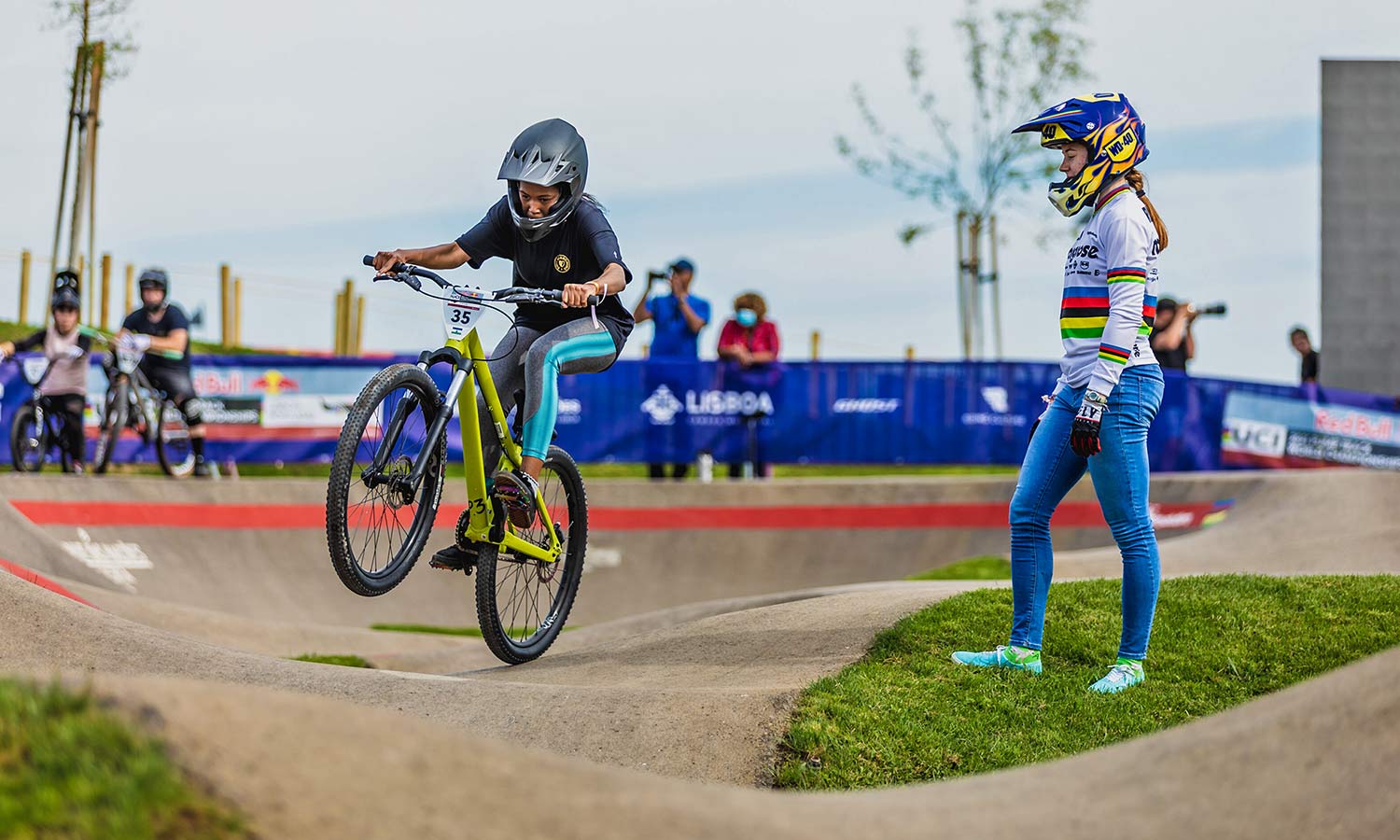 Finally this past October, the 2021 Red Bull UCI Pump Track World Championships made it to Portugal. And in her first flight and ‘big journey’ out of Africa saw Leuta make her way to Portugal to compete. 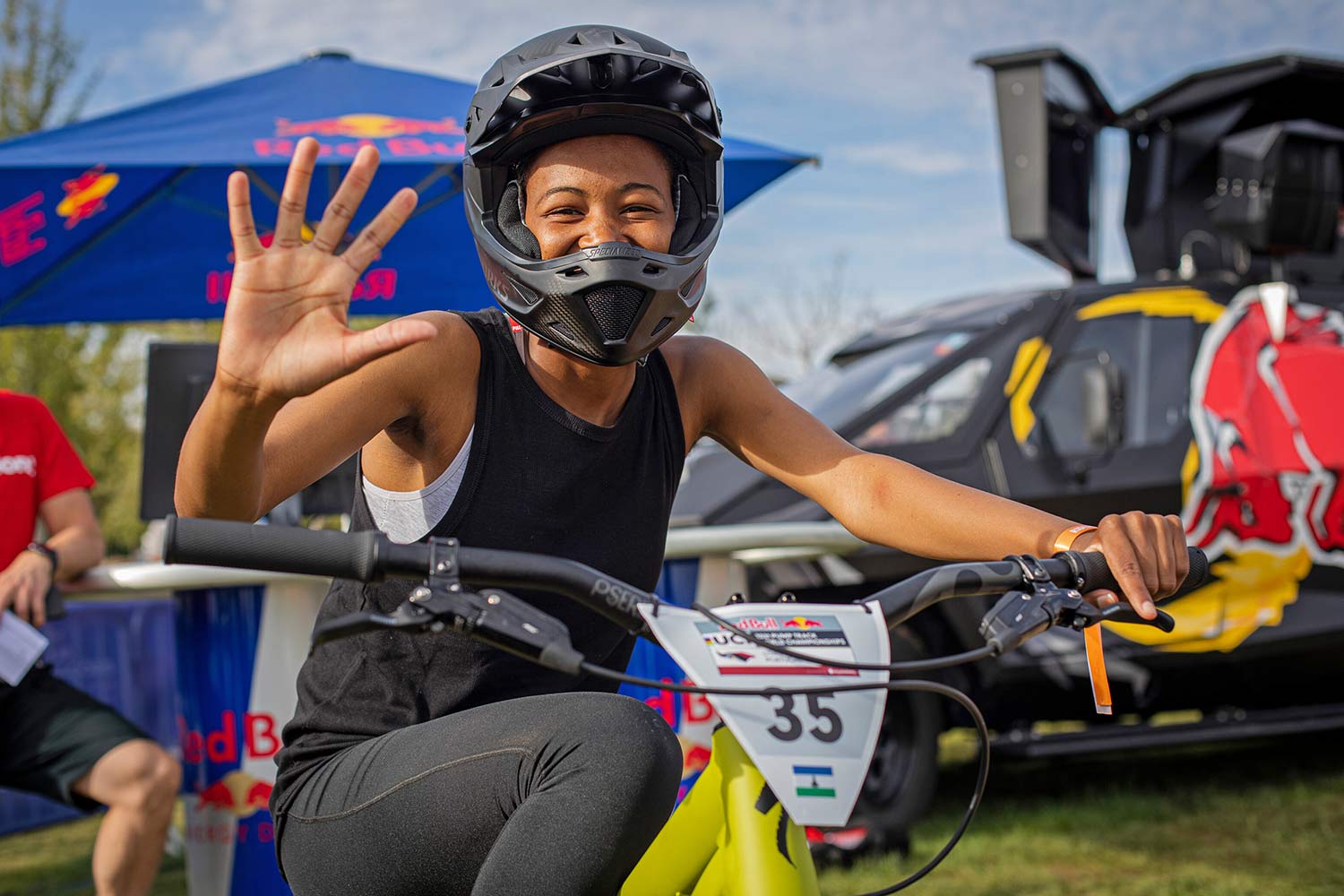 While she didn’t win Worlds, coming in a little more than 8 seconds behind the fastest woman Aiko Gommers, Leuta posted a solid showing, and had a blast doing it… 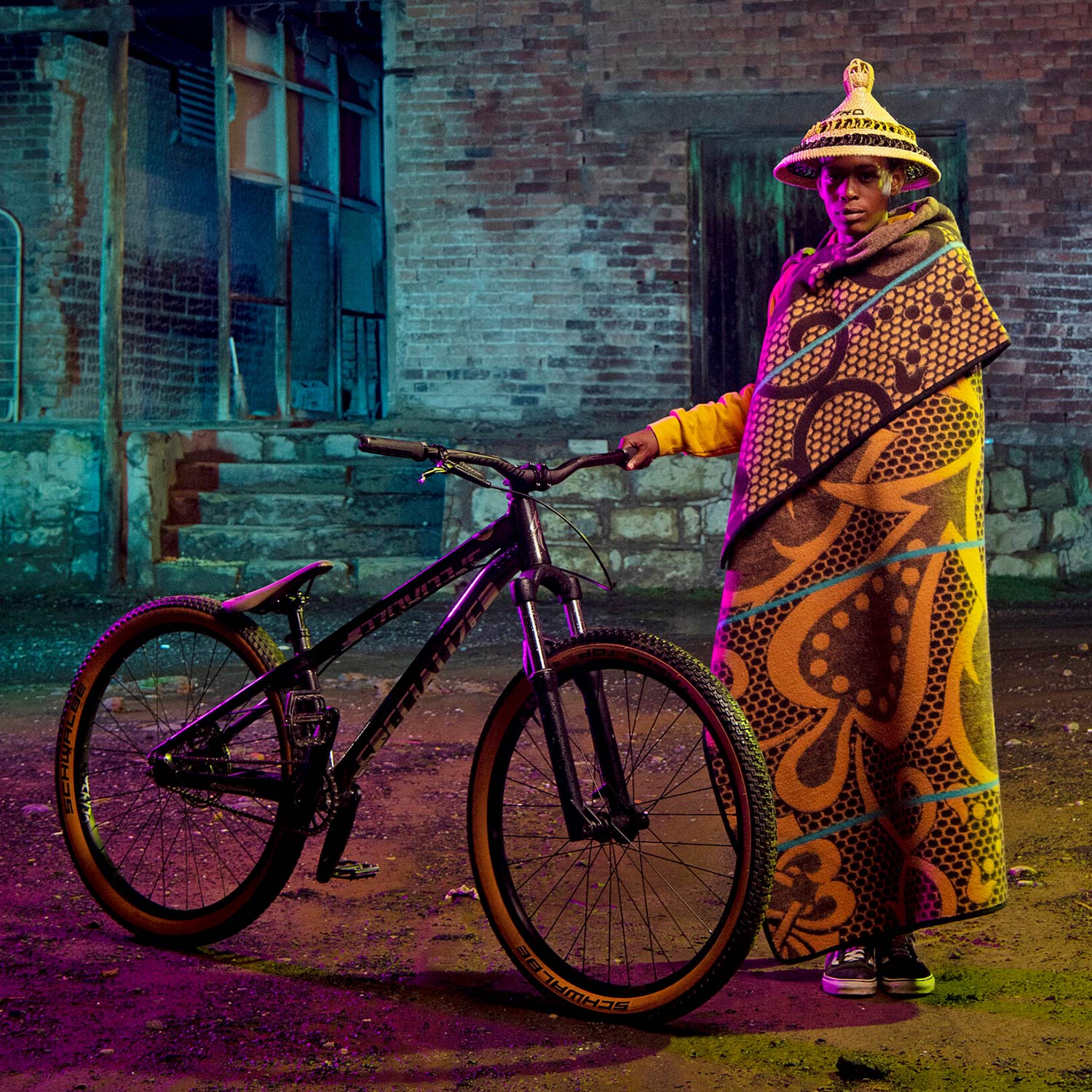 …and doing some cool Red Bull photoshooting, too. 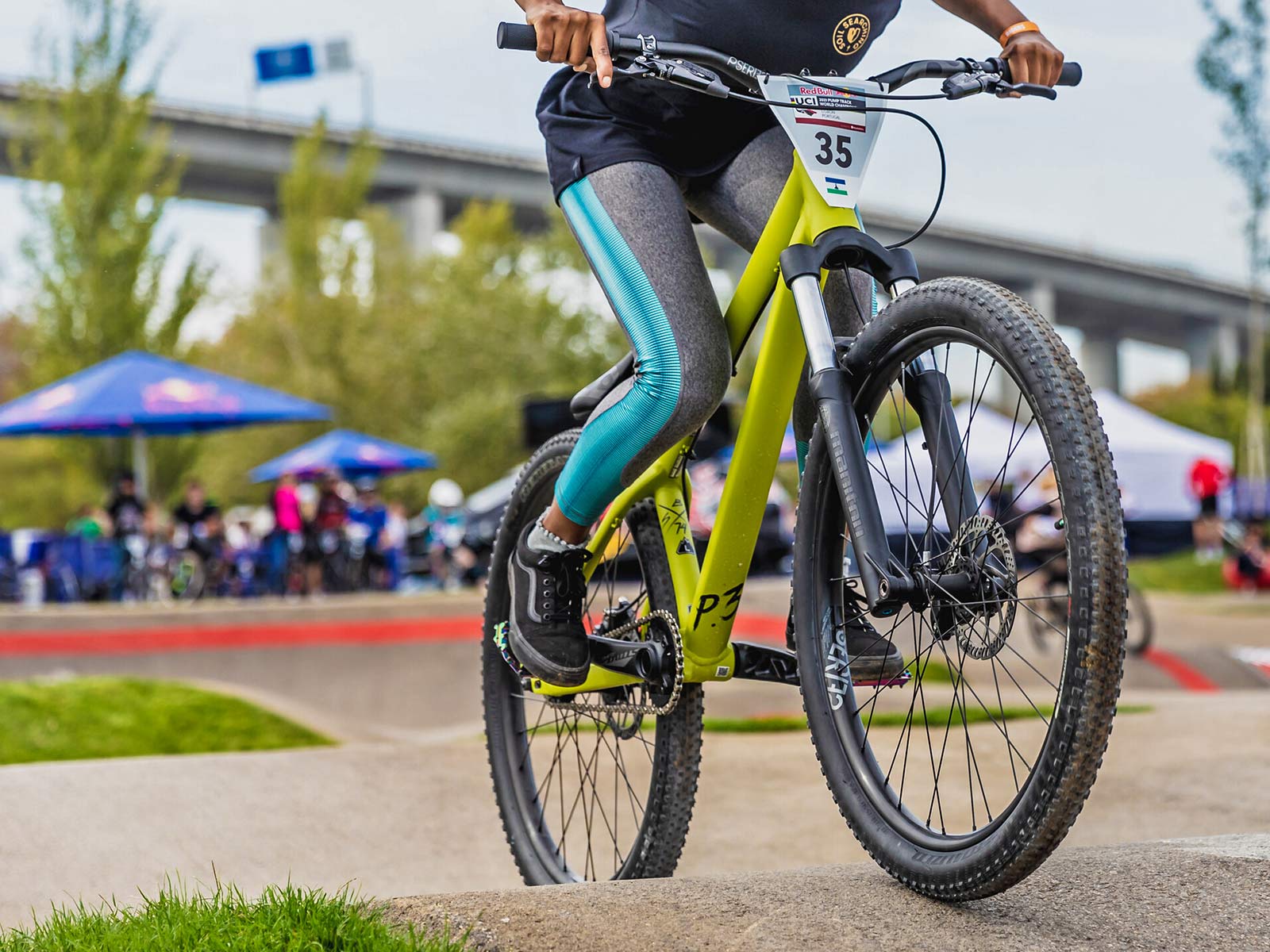 Plus, she’s now got her own custom-built bright yellow-green Specialized P3 dirt jump bike to bring back home to show the boys how to go fast – where she opens up the local track every Thursday & Sunday to get more kids interested in riding.  “I always want to inspire youngsters, I feel happy that they support me. I want to do more for them to set a good example.” 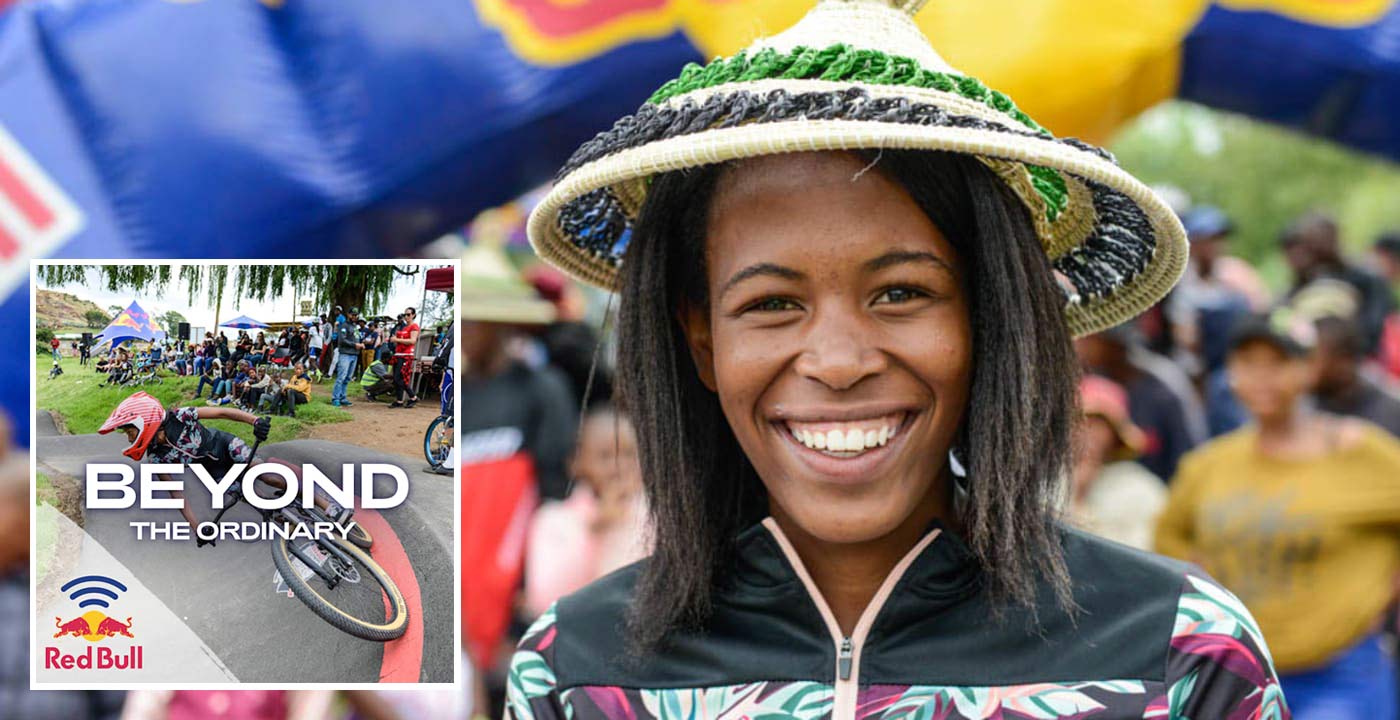 Hear more about Khothalang Leuta in Red Bull’s podcast: “Beyond The Ordinary – The Fastest Girl in the Village“.

What is Pump for Peace?

Pump For Peace is a global non-profit project by track builder Velosolutions, together with Specialized, Crankbrothers, Troy Lee Designs & Vittoria to build pump tracks in underprivileged communities to inspire a new generation to ride bikes & get into ‘action sports’. 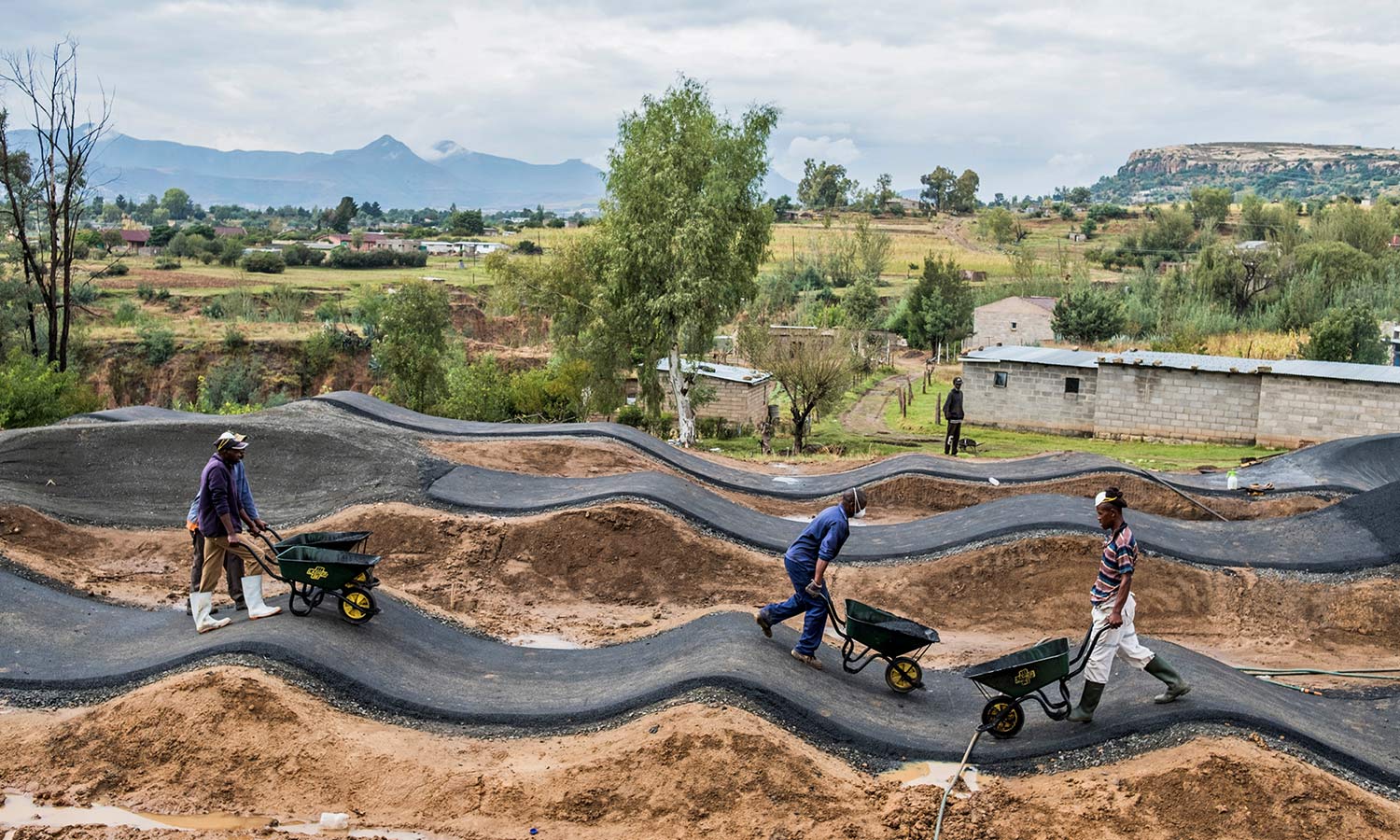 “No matter your race, gender, or religion, cycling has the power to unite communities around the world, #pumpforpeace was founded on this belief and that by making the sport more accessible we can help promote a more tolerant future.” 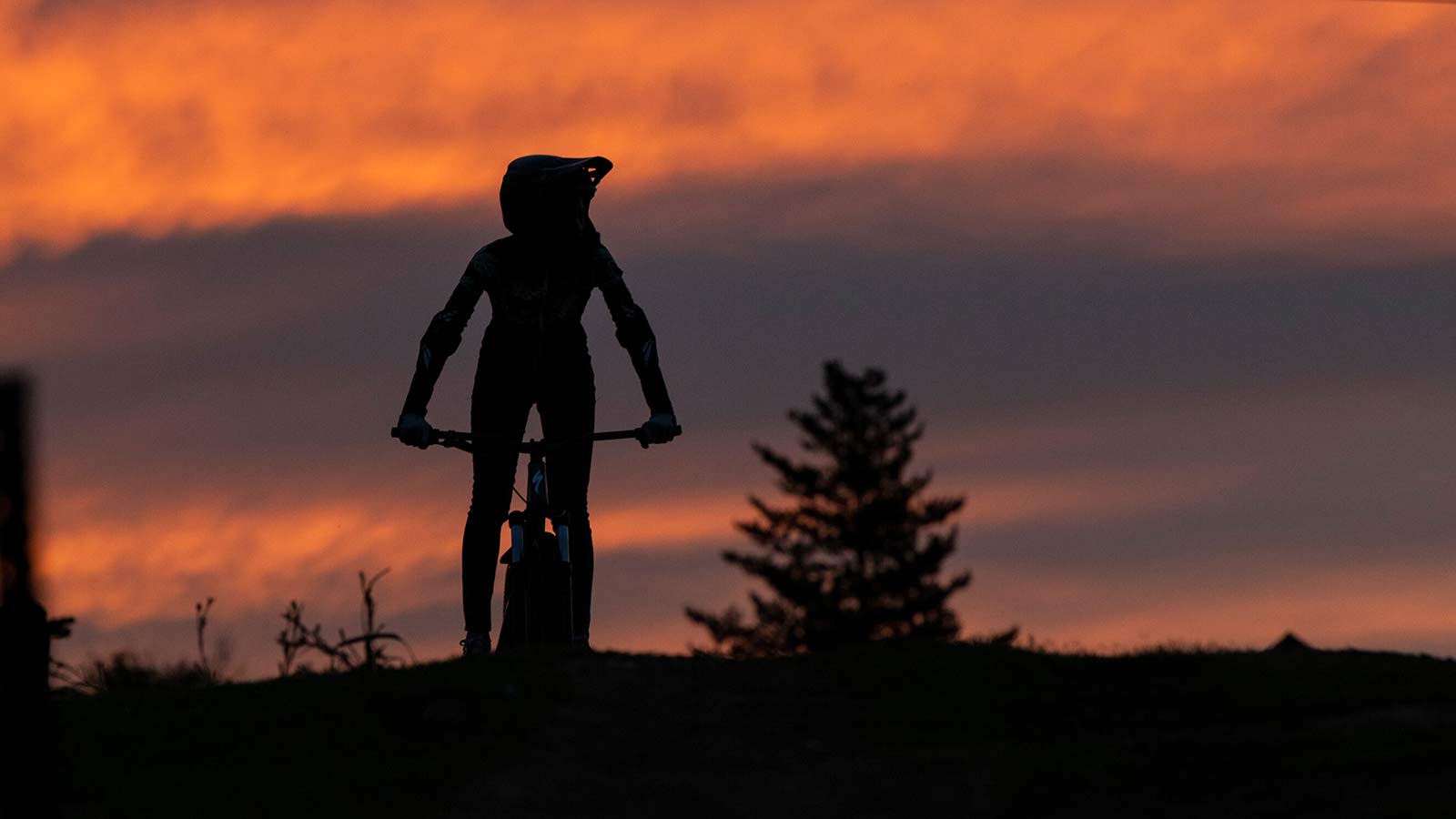 The Lesotho track was the first Pump For Peace project, finished back in early 2017. They’ve since built 8 tracks in 4 countries and have at least 6 more in the works now. Find out more and support them at: PumpForPeace.com

Cory Benson is the EU Tech Editor of Bikerumor.com.

Cory has been writing about mountain bikes, enduro, cyclocross, all-road, gravel bikes & bikepacking on and off for over 25 years, since before several of these even had names in our industry.

Prior to that (and at times, concurrently), Cory worked as an Architect specializing in environmental sustainability, a IBD bike shop designer & consultant, an independent product designer, a bike shop mechanic, and a mountain biking instructor.

Based in the Czech Republic for over 15 years, Cory spends much of his time traveling around Europe, riding bikes, and meeting directly with many of cycling’s key European product developers, industry experts & tastemakers for an in-depth review of what’s new, and what’s coming next. A technical off-road rider at heart since the 1990s, Cory’s cycling has evolved to cover everything from the wide range of riding aero road bikes on dirt roads to thrashing enduro bikes in the European bikeparks & trail centers, with plenty of XC, CX & gravel in between.