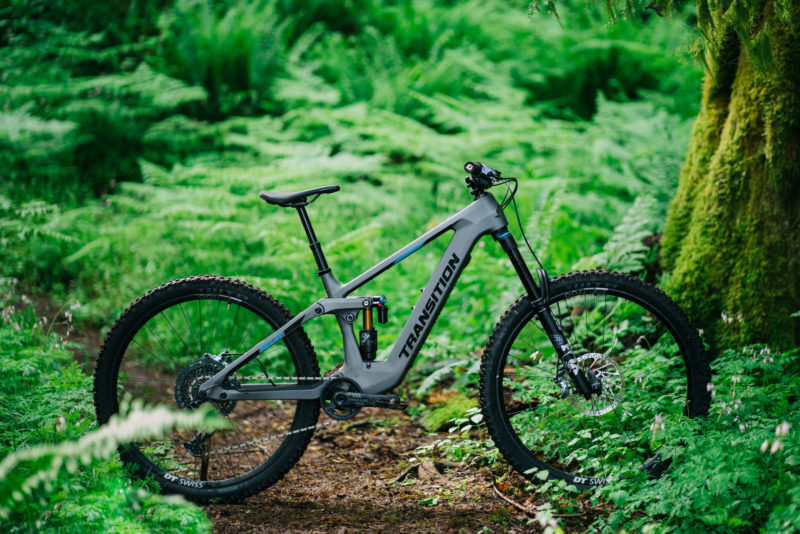 Transition Bikes is teasing us with promise of its second eMTB to date; the Relay, a 160mm or 170mm travel bike that can roll on a 29″ wheelset or a mixed-wheel setup. It is not a full-powered eMTB, featuring a small, but very neatly integrated Fazua Ride 60 System paired with a 430 Wh battery. “The mountain biker’s eBike”, is what they’re calling it, suggesting that the Repeater will deliver the best of both worlds; the motor assist of an eMTB, and the handling of a regular enduro bike. 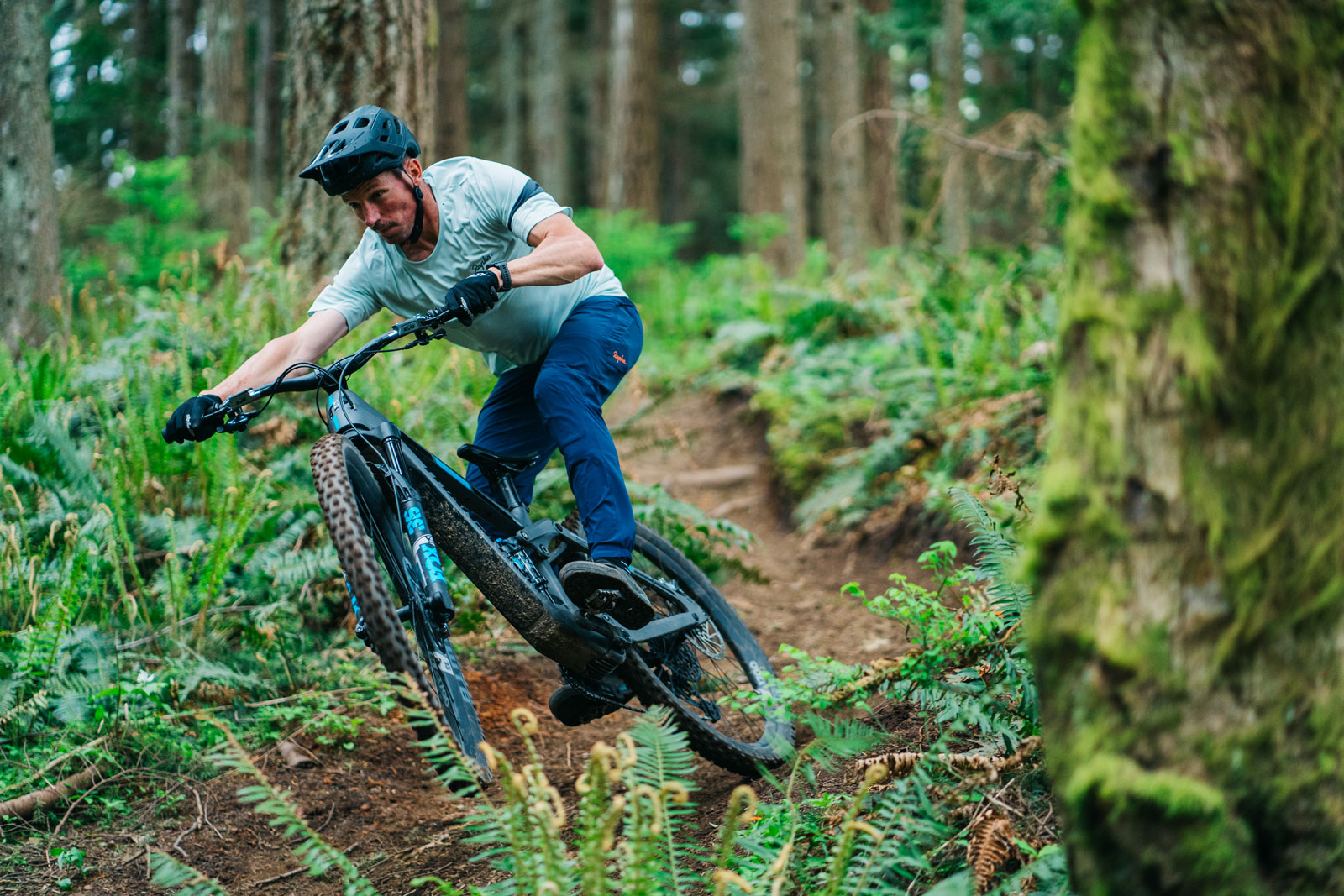 Transition tells us development of the Relay began way before the launch of their debut eMTB, the Repeater. While that Sentinel-inspired eBike is a full-powered eMTB with an 85 Nm Torque Shimano EP8 motor, it was the prospect of creating a more modular eMTB, one that could switch between electric and acoustic modes, that really got the R&D team excited about eBikes. 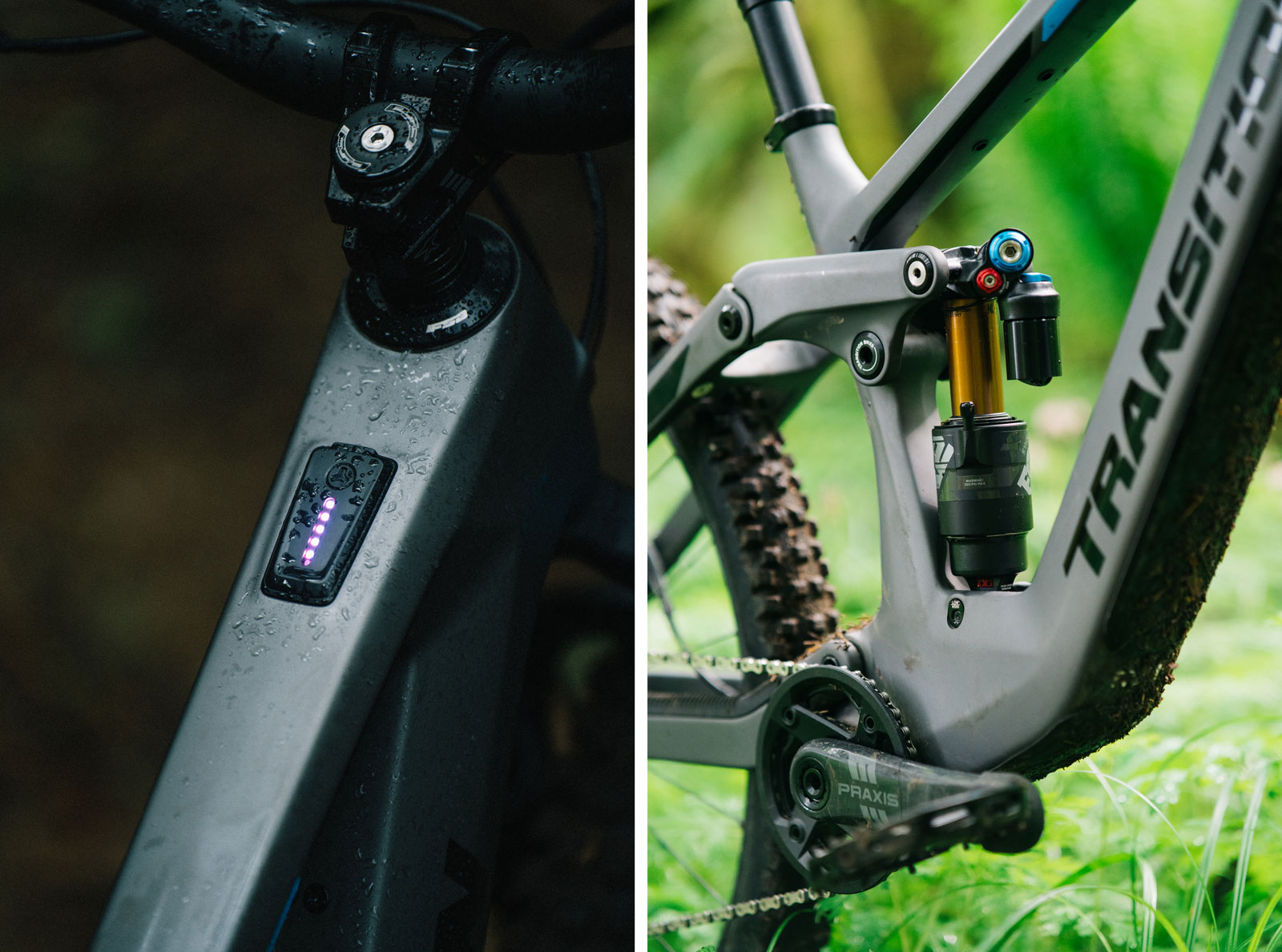 The (Porsche-owned) Fazua Ride 60 Motor is seamlessly integrated into the Relay’s carbon frame; fuss is kept to a minimum with a simple control unit integrated within the top tube displaying LEDs that, presumably, indicate battery life and/or assist mode. It looks like riders will be able to plug their phone into the control unit, and mount that to the bar/stem in order to see stats about their ride.

Achieving that goal was, they say, a long winding road that naturally intersected with the development of the Fazua Ride 60 system, a much smaller motor that delivers a maximum torque of just 60 Nm. A smaller, lighter motor, coupled with a smaller, lighter battery with a 430 Wh capacity, has resulted in an eBike they claim has almost the same range as the Repeater. The Fazua website informs us the system weight is 4.2kg. 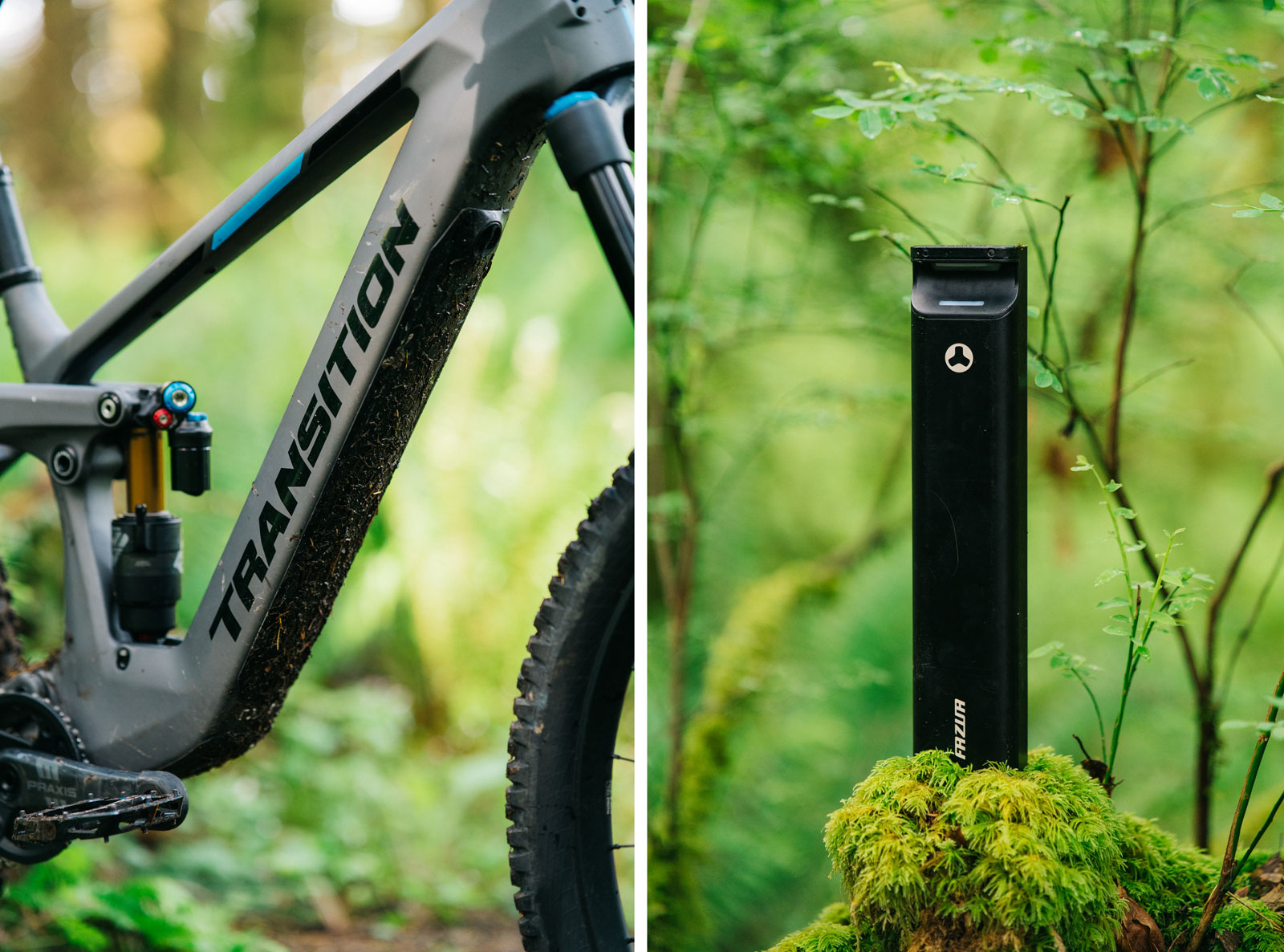 Of course, that battery is removable so riders will be able to drop its (claimed) 2.3kg if and when they feel they have the legs to go unassisted. While some Fazua motor-sporting eMTBs are able to release the motor from the frame, too (like the Trek E-Caliber with the Fazua Evation), the Ride 60 motor on the Relay cannot be removed. 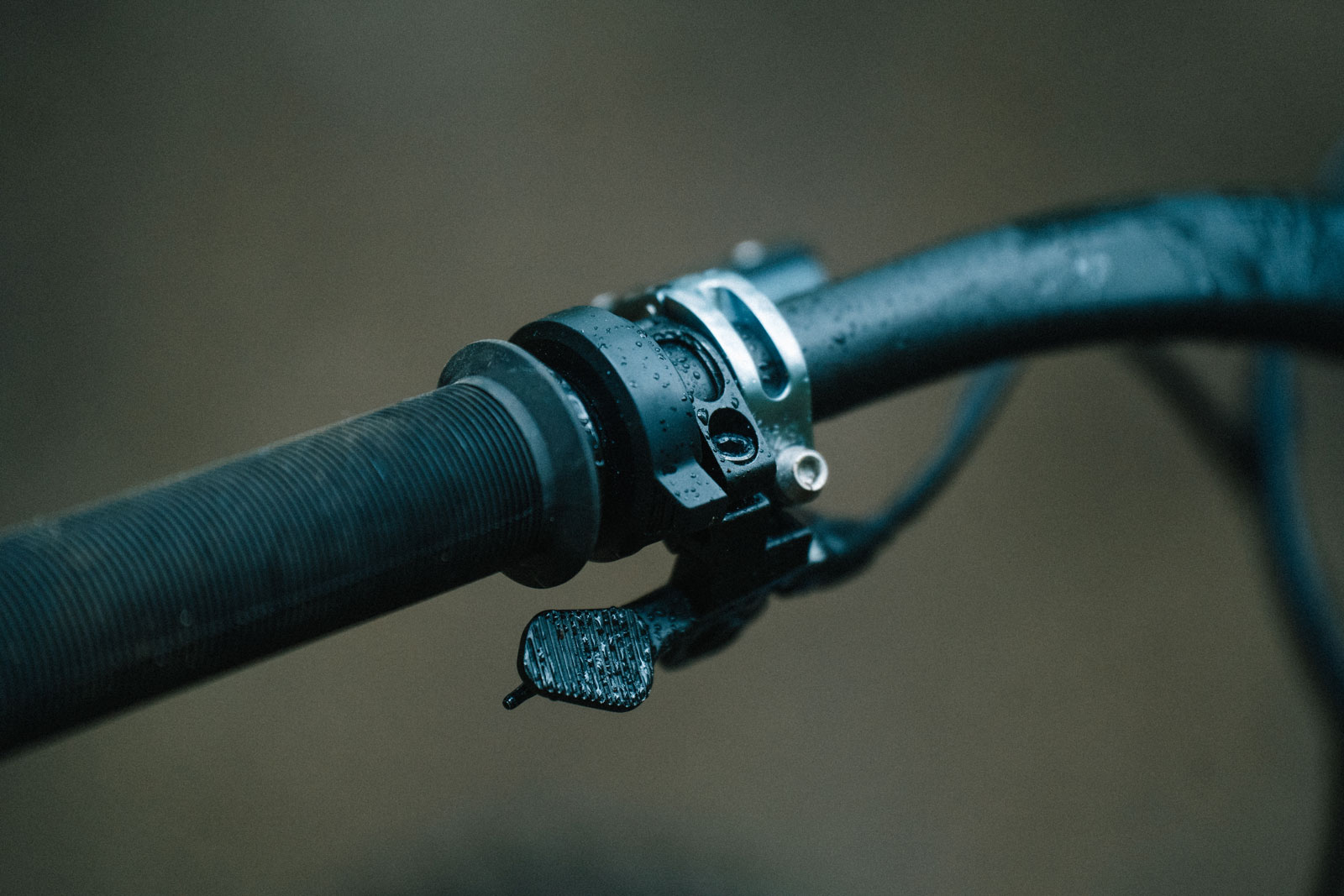 The Fazua Ride 60 system features a simple but elegant Ring Control on the bar, allowing riders to change the assist mode without removing their hand from the grip, and without needing to take their eyes off the trail.

The bike isn’t due until Spring 2023, and Transition has chosen to keep most details on the bike very close to their chest. But, having been furnished with a multitude of images of the Relay and a lovely shredit of pilots Hannah Bergemann and Lars Sternberg, we’re pretty certain that, like the Repeater, this one too is designed to be ridden hard. 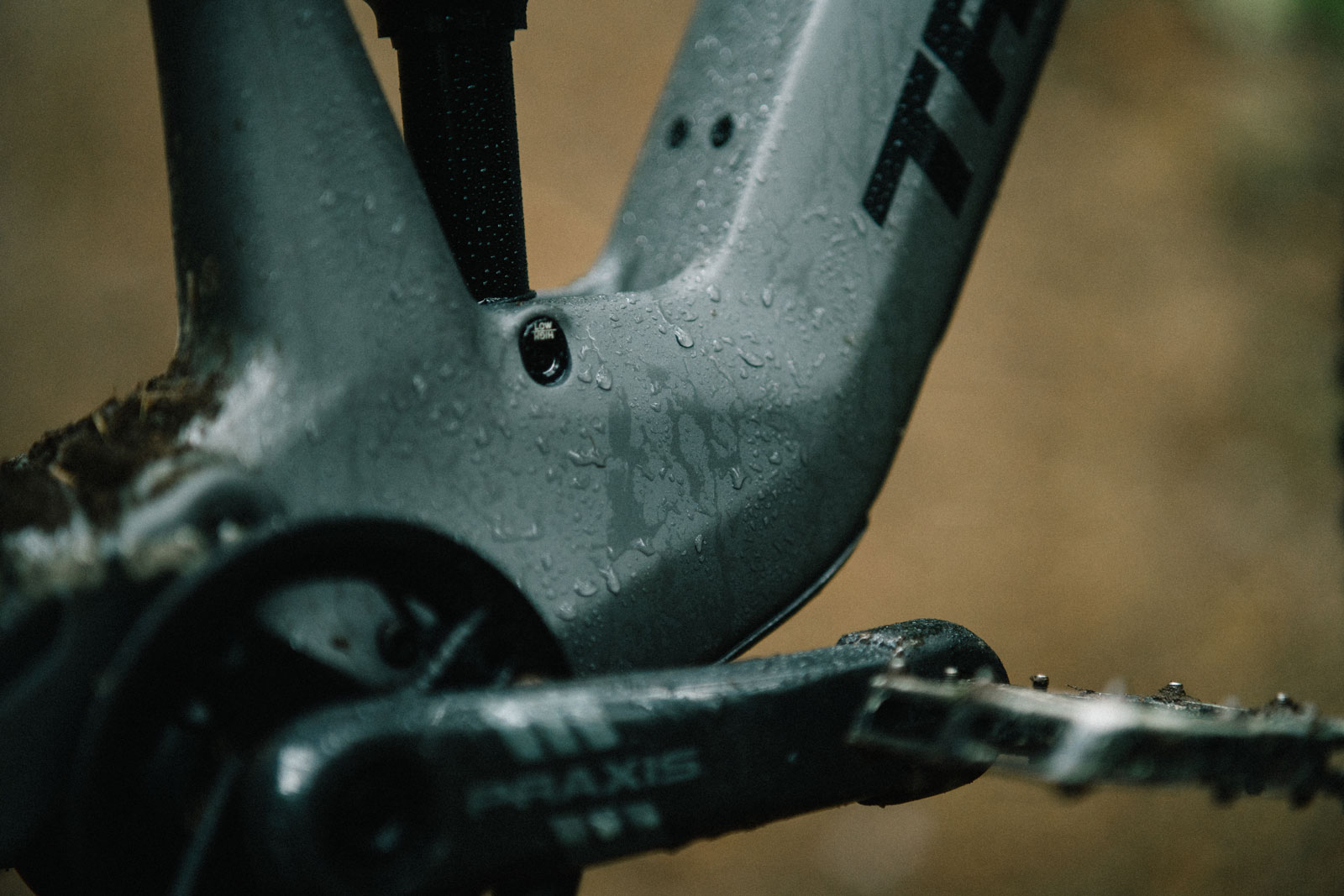 A flip-chip at the lower shock mount will likely adjust for the geometry changes that come with switching out a 29″ rear wheel for a 27.5″ rear wheel

We don’t have any geometry figures to share. All we know is that the Relay will be able to run 160mm or 170mm of rear wheel travel with a complete 29″ or a mullet wheelset. In the video, Hannah Bergemann is riding an aluminum frame, while Lars Sternberg is on what looks to be a full carbon frame; we can confirm that both will be available come next Spring, as Transition say they want to make the bike accessible as possible.

How much will it weight? Well, Transition hasn’t furnished us with any weight information yet, but we’ve done a little guesswork. The Shimano EP8 system with 630 Wh battery seen on the Transition Repeater weighs around 6.3 kg. That’s 2.1 kg heavier than the Fazua system seen here on the Relay. Despite its size and intentions, the Repeater is actually pretty lightweight, weighing a claimed 22.3 kg (49.1 lbs) in a size medium. Thus, we hypothesize (wildly) that the Transition Relay will weigh a maximum of ~20 kg in its top-end model. With the smaller downtube and smaller motor housing, it may even come in well under that. We shall have to wait and see!