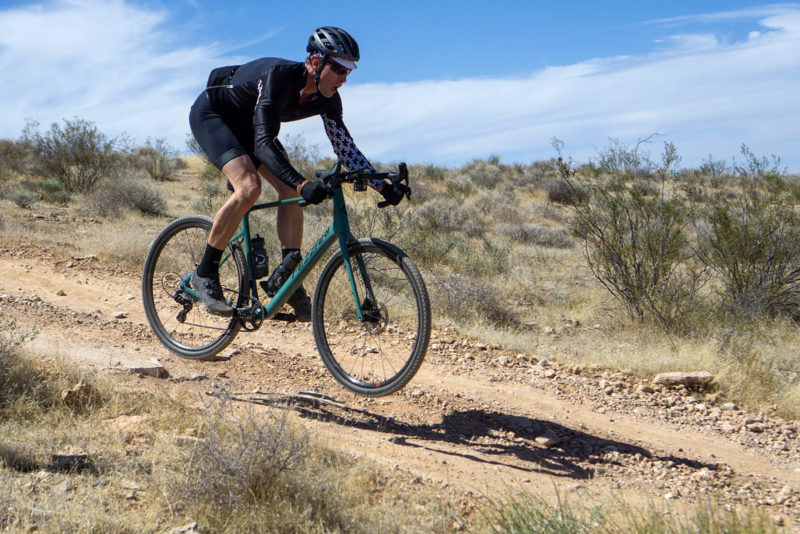 Originally planned for a spring launch, I’ve had plenty of time aboard the new Fezzari Shafer gravel bike. I’ve ridden it around the desert of Utah, taken it on a three-day bikepacking ride to the NC coast, and raced it in the NC Belgian Waffle Ride.

Through it all, I’ve probably put close to 600 miles on it and haven’t found a single thing to complain about. Whether stripped down with ultralight race wheels or loaded with bags and aero road wheels, it’s performed flawlessly and been an absolute joy to ride. Here’s why… 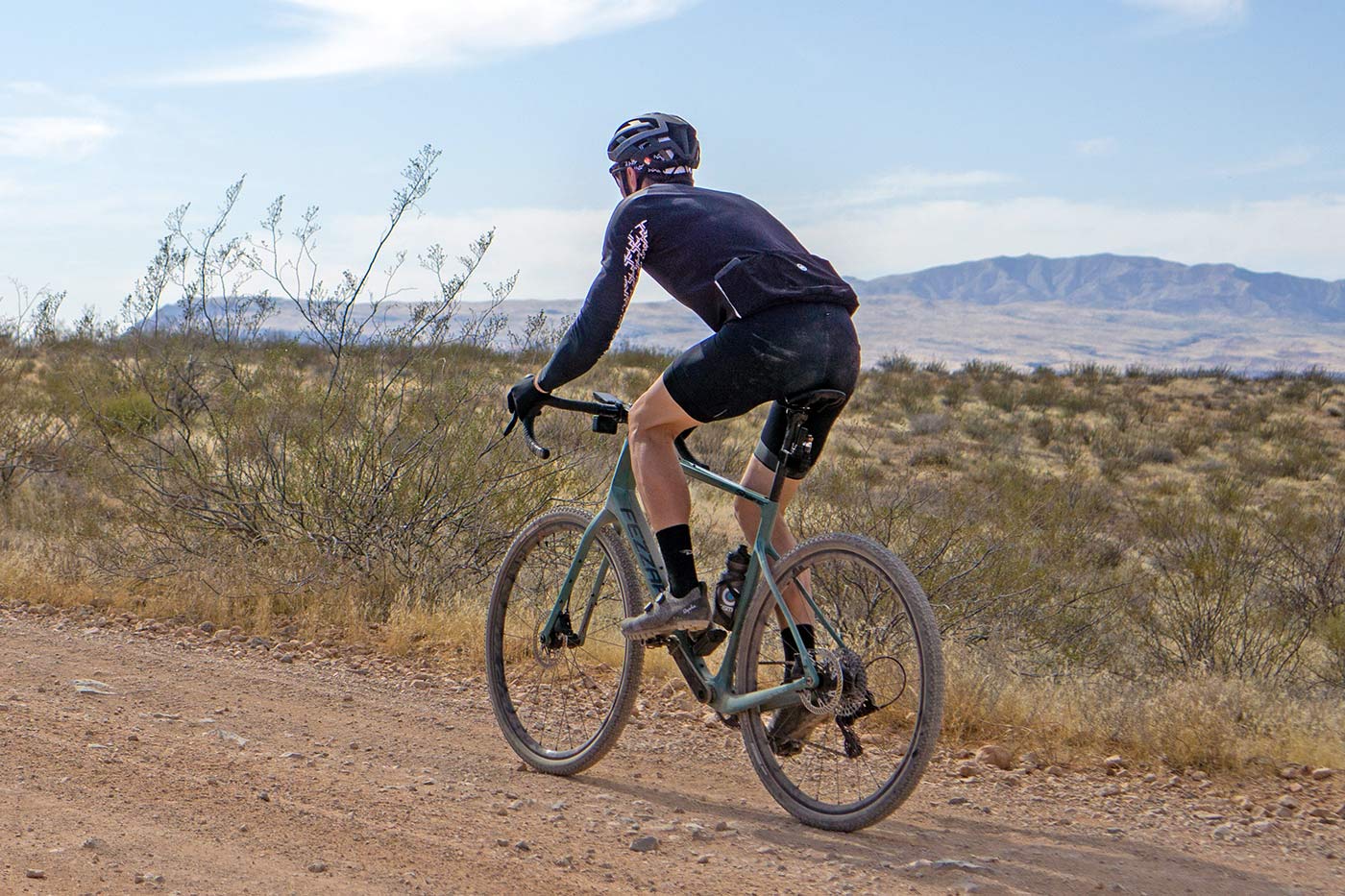 In stock trim, I tested the Campagnolo Ekar build, which for $3,699 is a helluva deal. It comes with Fulcrum Rapid Red 500 wheels, a carbon FSA seatpost and alloy bar, Ergon saddle, and Maxxis Rambler 700×45 tires.

Over the dry terrain of St. George, Utah’s powerline and public land access roads, the combination of a thin, compliant seatpost and big tires provided the comfort and traction needed to power up the climbs and crush the flats. 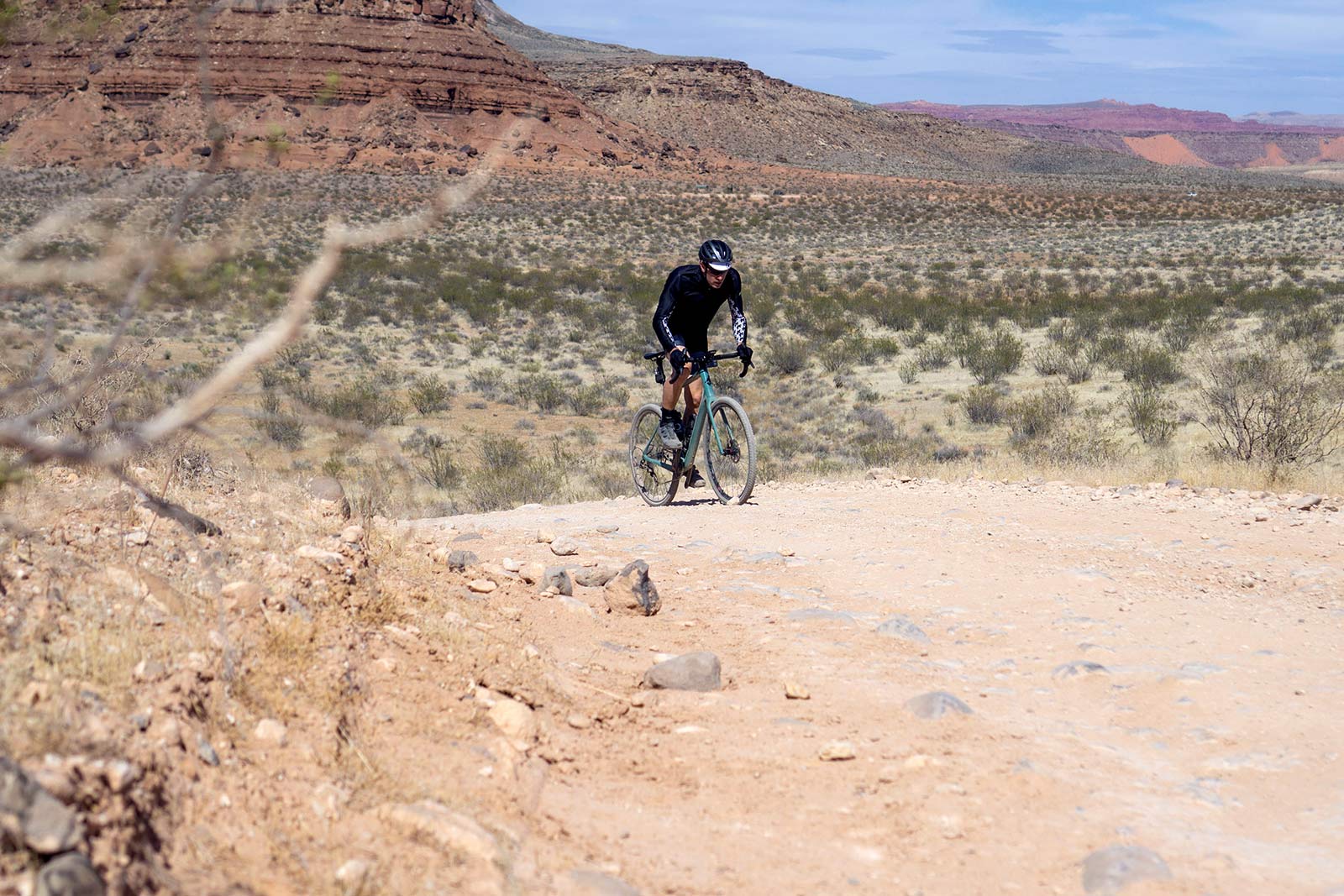 Fezzari made a big deal about their geometry in the Shafer’s press release, citing their attention to balancing high-speed stability with comfort and maintaining its ability to handle low-speed maneuvers, too.

It paid off. Even if it did take them a few years longer than anyone else to launch a proper gravel bike, I’d say it was worth the wait. It’s light, even with bigger tires and stout Fulcrum wheels, and it rode like a lightweight bike in all the right ways.

Meaning, it really is compliant. I could sit and hammer or just cruise along comfortably for hours over embedded rocks and undulating terrain. From the thin, low seatstays to the 27.2 carbon seatpost to the thin fork legs, Fezzari built a bike that’s a true rider’s gravel bike.

So, naturally, I turned it into a road bike: 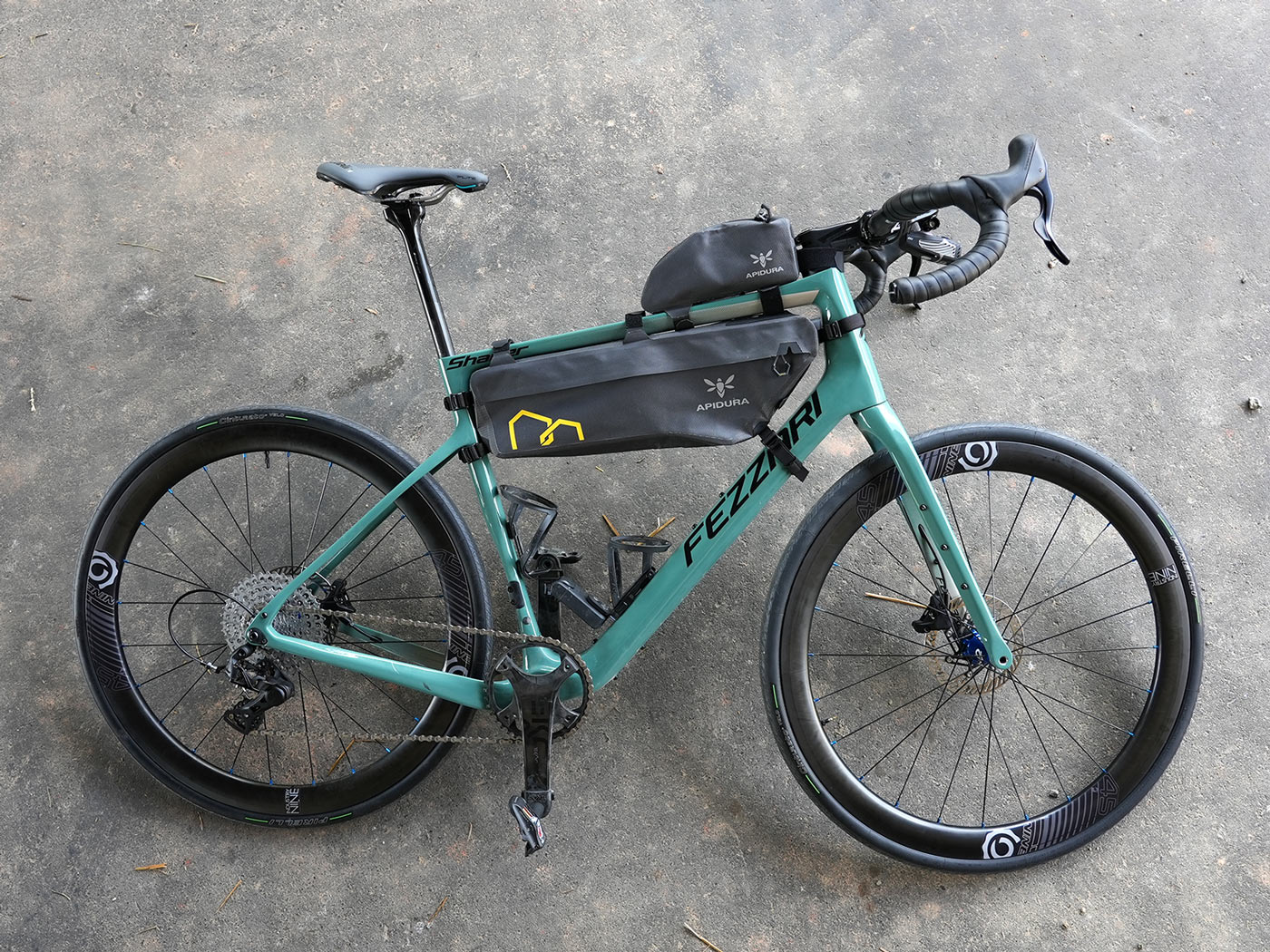 After a couple of months, I’d kinda fallen for it, so I wanted to see how it handled real long distances. After all, just because Chris Burkard rode it across Iceland doesn’t mean normal people with normal legs and lungs would like it just as much, right?

So I swapped in Look KEO road pedals and Industry Nine i9.45 carbon road wheels with 700×28 Pirelli Cinturato tubeless tires, then we headed out on our annual 3-day ride from Greensboro to Atlantic Beach on the North Carolina coast. 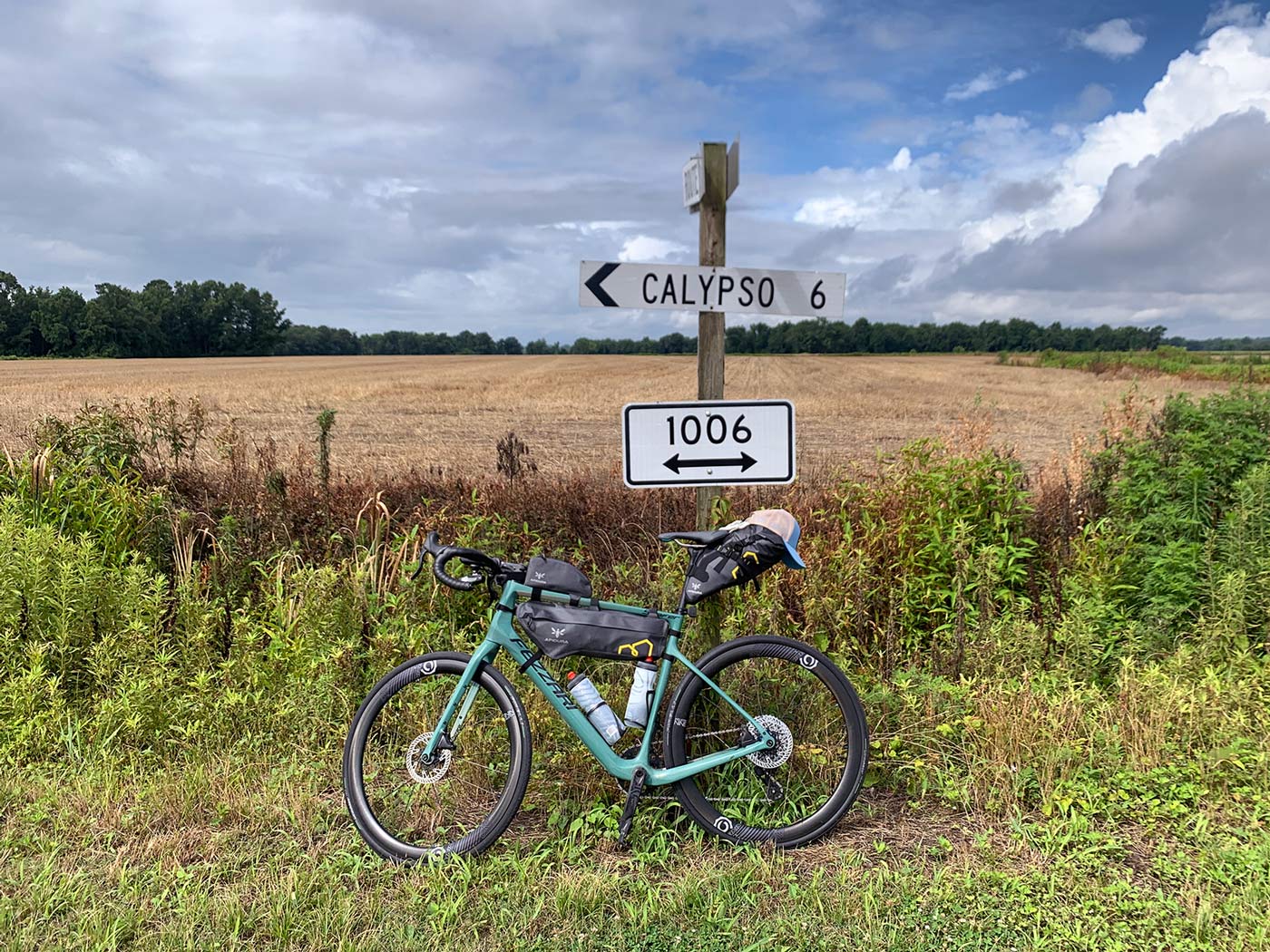 The wheels definitely dropped weight, and were the right choice. Apidura’s Expedition Series top tube, frame, and saddle bags were strapped on and loaded up (read my review of those bags here).

I’d done several group road rides prior to the trip, and the bike handled as well as any endurance road bike I’ve ridden. Still super comfortable, and I like that the top tube is quite narrow as my knees tend to move inward at the top of my pedal stroke.

I also like that they spec a straight (zero setback) seatpost, since this is usually something I’d replace on bikes with a setback post. I prefer my saddle a little more forward, over the pedals, and this bike fit me really, really well straight out of the box. Which is good, because I’d picked it up from one of their reps and skipped the usual 23-point fit process Fezzari’s customers usually go through.

So, then, I decided to race it… 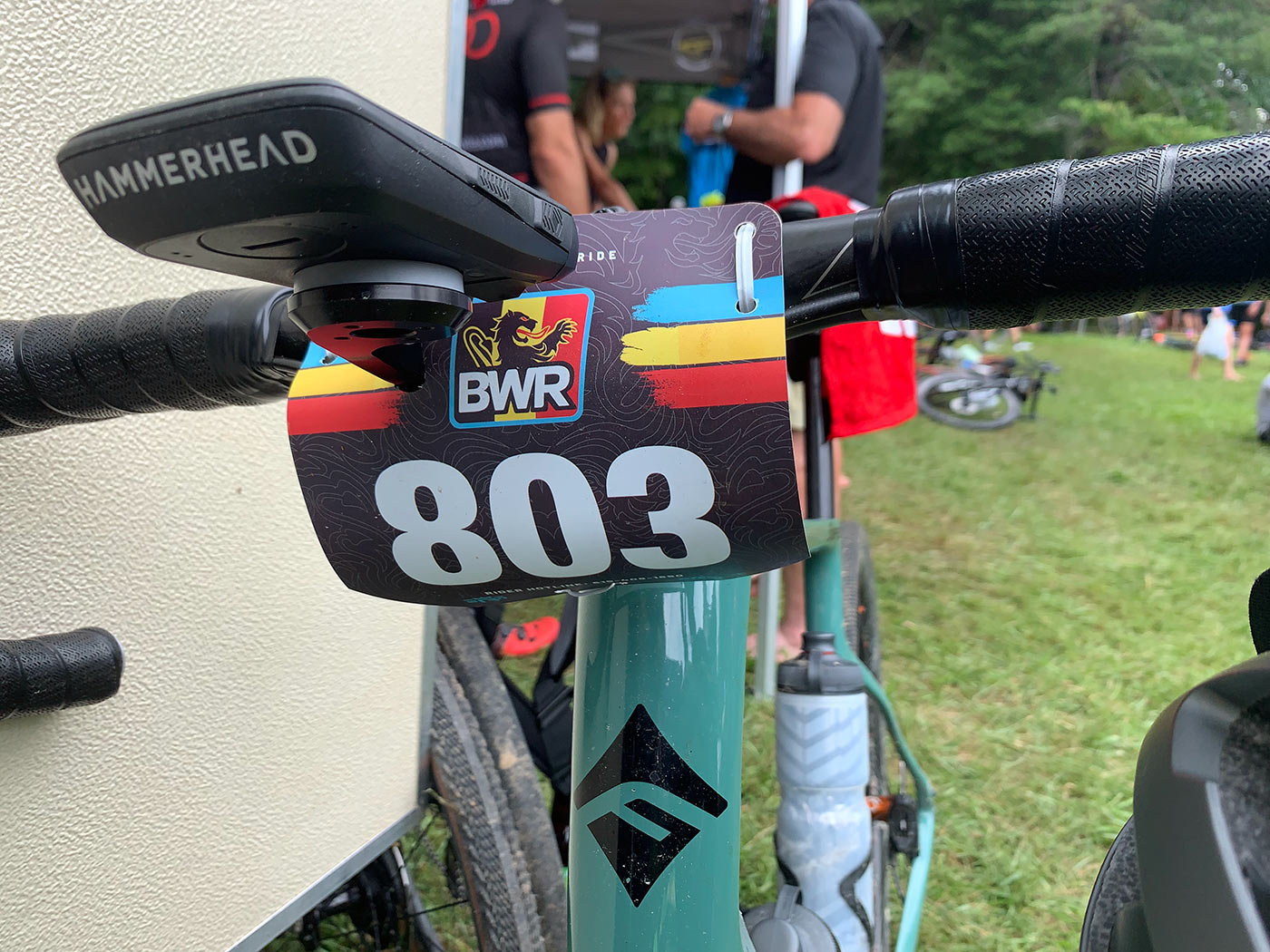 Unfortunately, this is the best/only pic I have of the bike from the inaugural Belgian Waffle Ride NC.

This time, I subbed in Industry Nine UL250 Carbon CX wheels because they’re just about the lightest things out there for gravel racing, and BWR had almost 10,000 feet of climbing in store for us. I paired those with Schwalbe G-One Speed 700×35 tires, which, contrary to the published race intel, were ideal for the ~70% paved route. I ran them at just 32psi (F) and 35psi (R) and they were perfect…light, fast, and efficient, with enough traction to rip past people on the gravel descents.

I also swapped in a more ergonomic carbon fiber gravel bar (tell you more about that later… 😉 and Lizard Skins’ extra-thick 4.6mm DSP V2 bar tape, which was a true hand saver. These swaps made the bike really light, really fast, and even more comfortable. 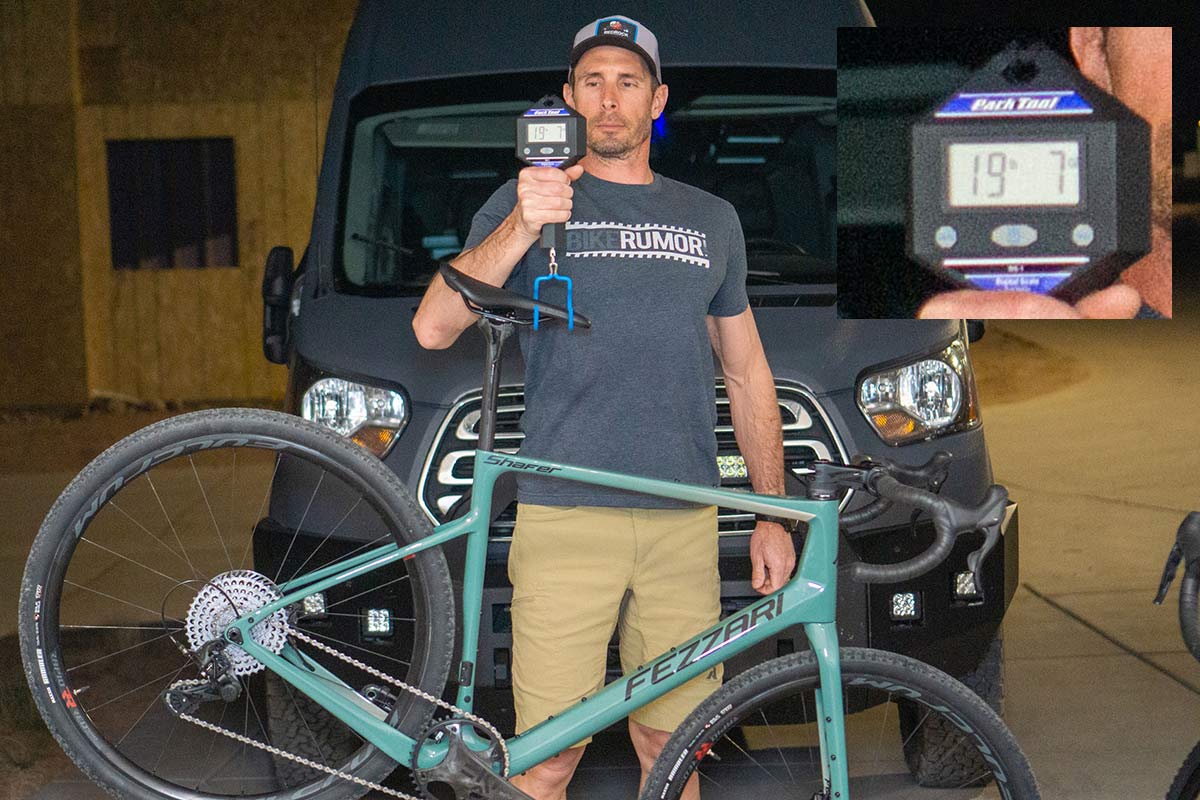 Which is saying a lot, because the bike is already reasonably light (19lb 7oz / 8.82kg in size XL) and extremely fast, capable, and comfortable.

Ultimately, my wheel-and-tire swaps merely highlighted just how good the Fezzari Shafer gravel bike is as a do-it-all drop bar fun bike, especially if you like to go fast. It’s going to be hard to beat, period, and even harder to beat for the price. Definitely worth checking out.

Check out the full tech, design, geo, and pricing in our launch coverage.