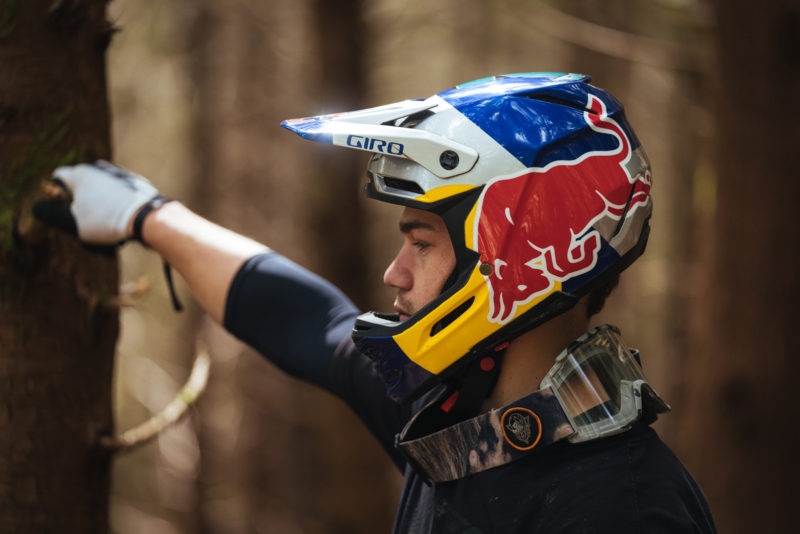 Giro has released an all-new DH-Rated Full Face Helmet to replace the long-standing Disciple; the Giro Insurgent Spherical, a helmet they claim is 200g lighter than the Disciple, and offers 50% better cooling efficiency.

The full face helmet market is increasingly pushing toward lightweight, extremely well-ventilated helmets, fueled by riders’ desire to remain cool while pedaling to the next drop-in. That’s not where the Giro Insurgent is looking to compete, necessarily; our small weighs in at 1052g (940g claimed) making the 1,040g claimed weight of the M/L rather unlikely (see more details about this discrepancy at the foot of this article.. That’s very heavy in comparison to the likes of the 640g Specialized Gambit, for example, but the Giro helmet designers were clear they wanted a more measured approach to balancing weight, ventilation, comfort and security, opting instead to be driven by the needs of the professionals of our sport who put their bodies on the line week-in week-out.

Debuted by Richie Rude, Bex Baraona and other members of Yeti Fox at EWS Tweed Valley, the Giro Insurgent was designed with their feedback, as well as the feedback from Reed Boggs and Carson Storch who rode Red Bull Rampage in an earlier version of the Insurgent back in October. Here is the final result. 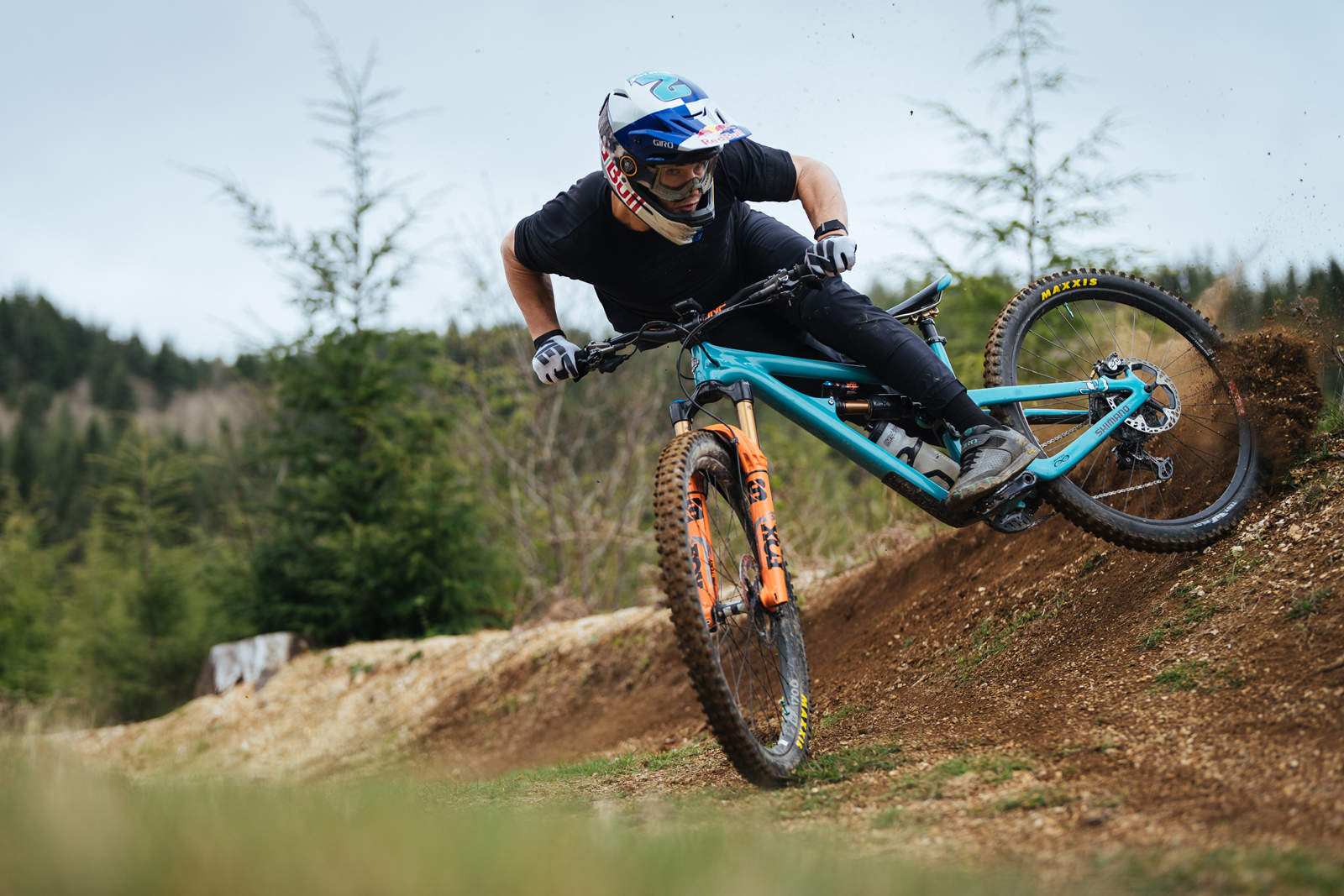 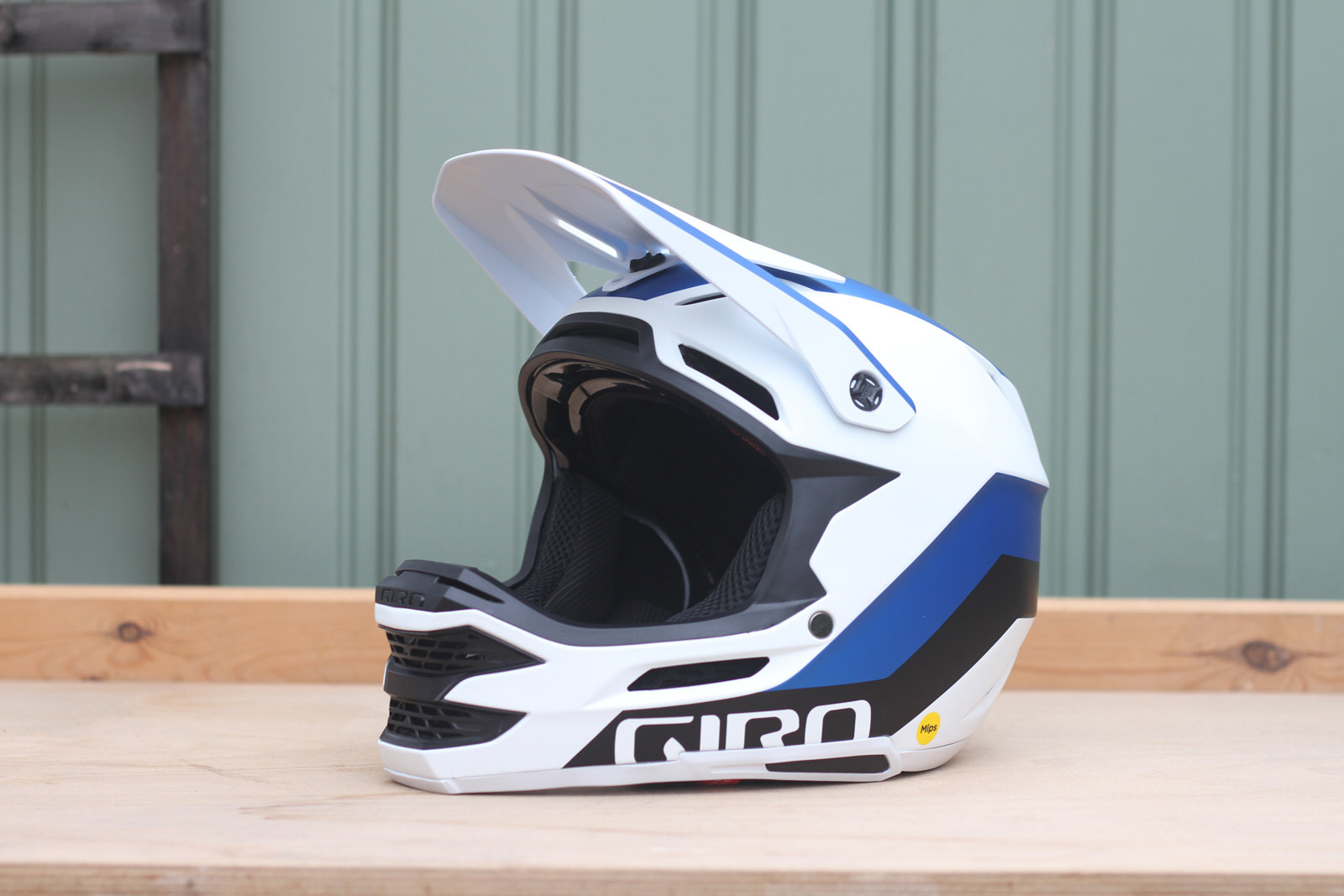 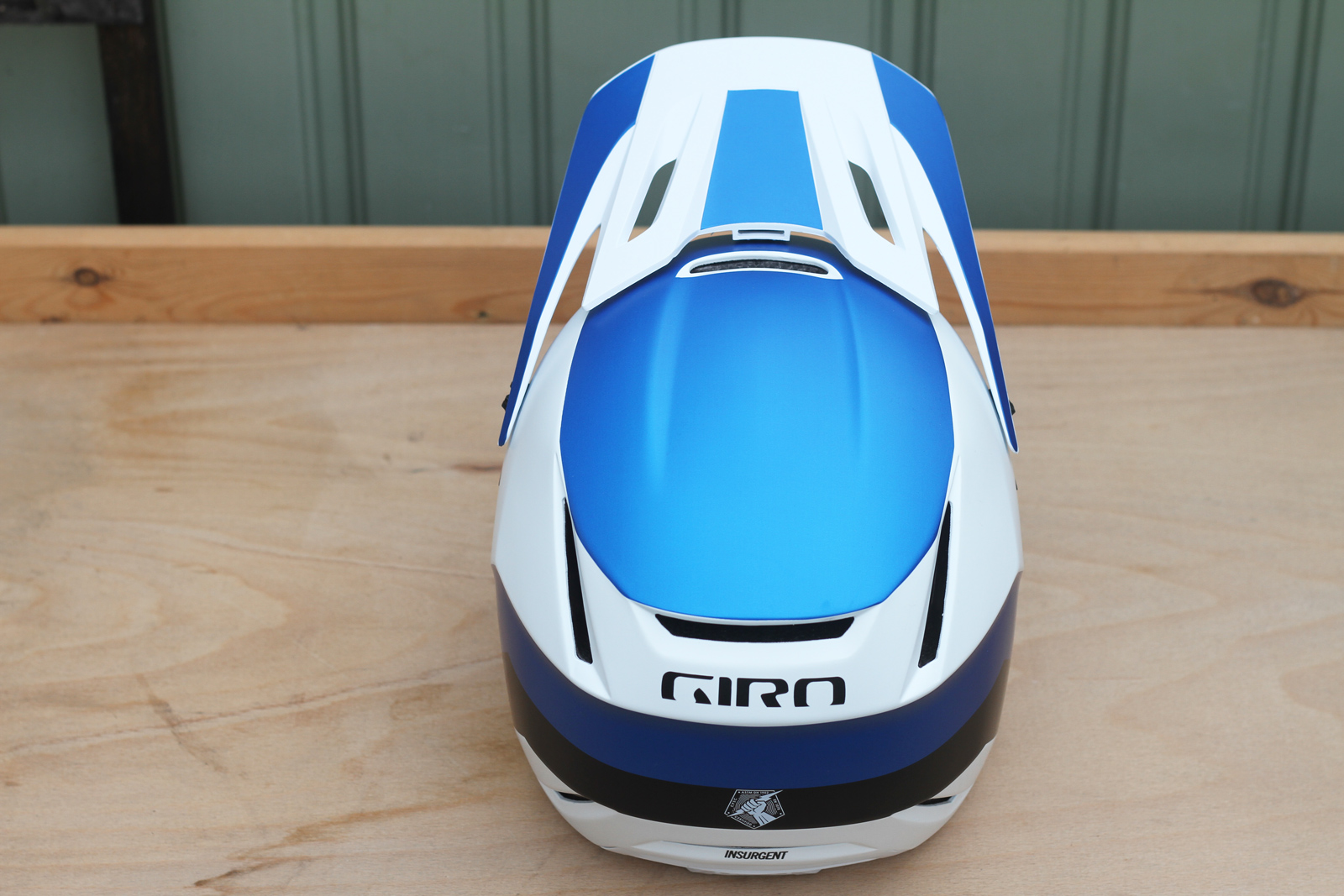 The Giro Insurgent gets a pre-preg fiberglass shell, as opposed to the slightly lighter carbon fiber shell you’ll find on helmets in a much higher price bracket.

I measure my head circumference at 54cm, thus I ordered the XS/S, meant to fit head circumferences between 51cm and 55cm. The Giro Insurgent Helmet comes installed with a set of 25mm thick cheek pads, with a set of thicker 30mm pads in the box to dial in fit. I would say the fit is tight, but not too tight. Very secure-feeling, rather. I have a round face, so definitely do not feel the need to swap out the cheek pads for the thicker ones, but there is scope here for adapting the helmet to a narrower face. 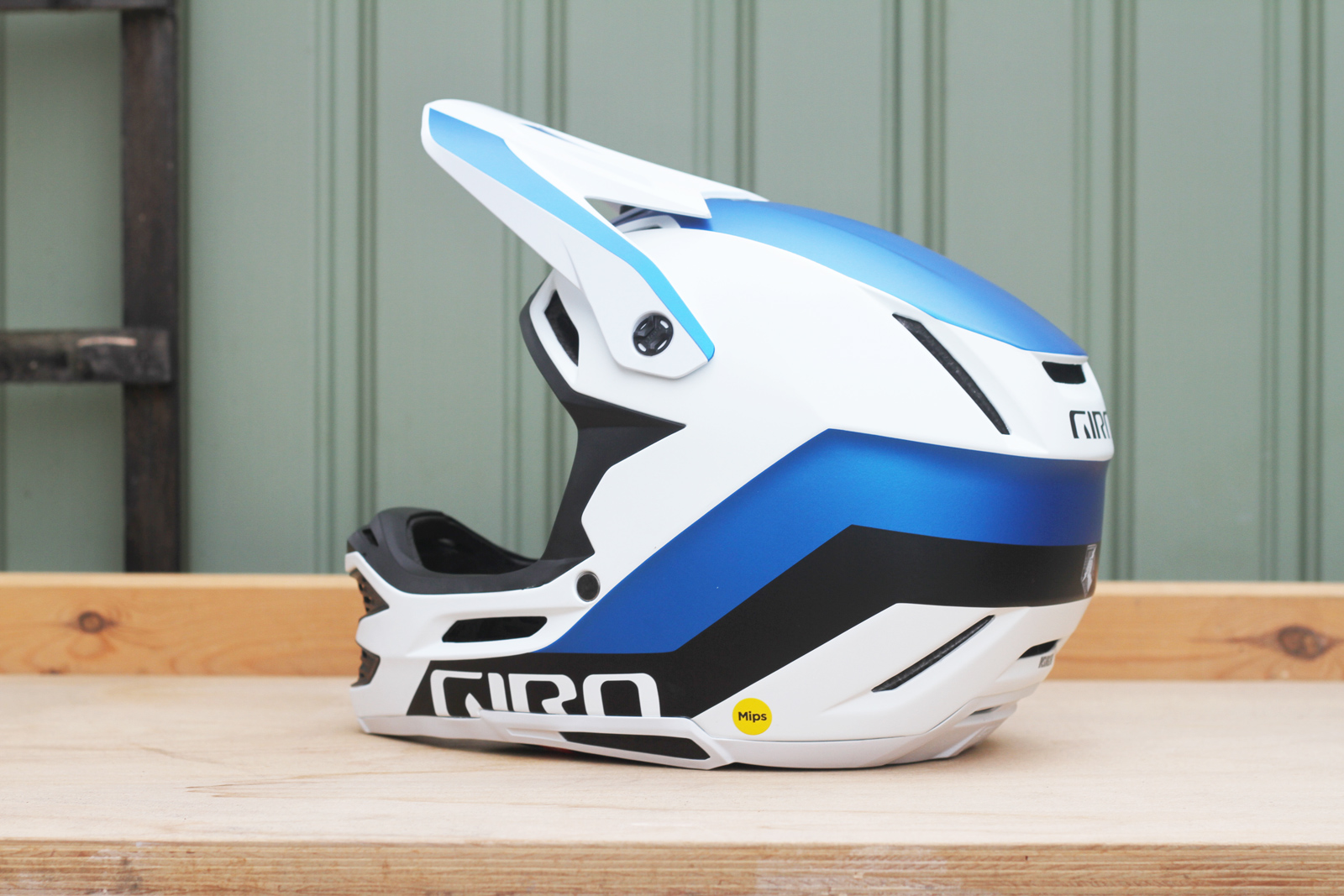 In the event of an accident, the cheek pads can be removed while the rider is still wearing the helmet, thanks to the quick release tabs that secure each pad at three locations. This could help emergency responders to remove the helmet more safely, minimizing head movement.

The fit feels spot on. The cheek pads clear my ears comfortably, and sound isn’t overly damped. I can hear things going on around me reasonably well, for sure. I’ve had this helmet in my hands for less than 24 hours, so anything more in the way of a review will have to wait. 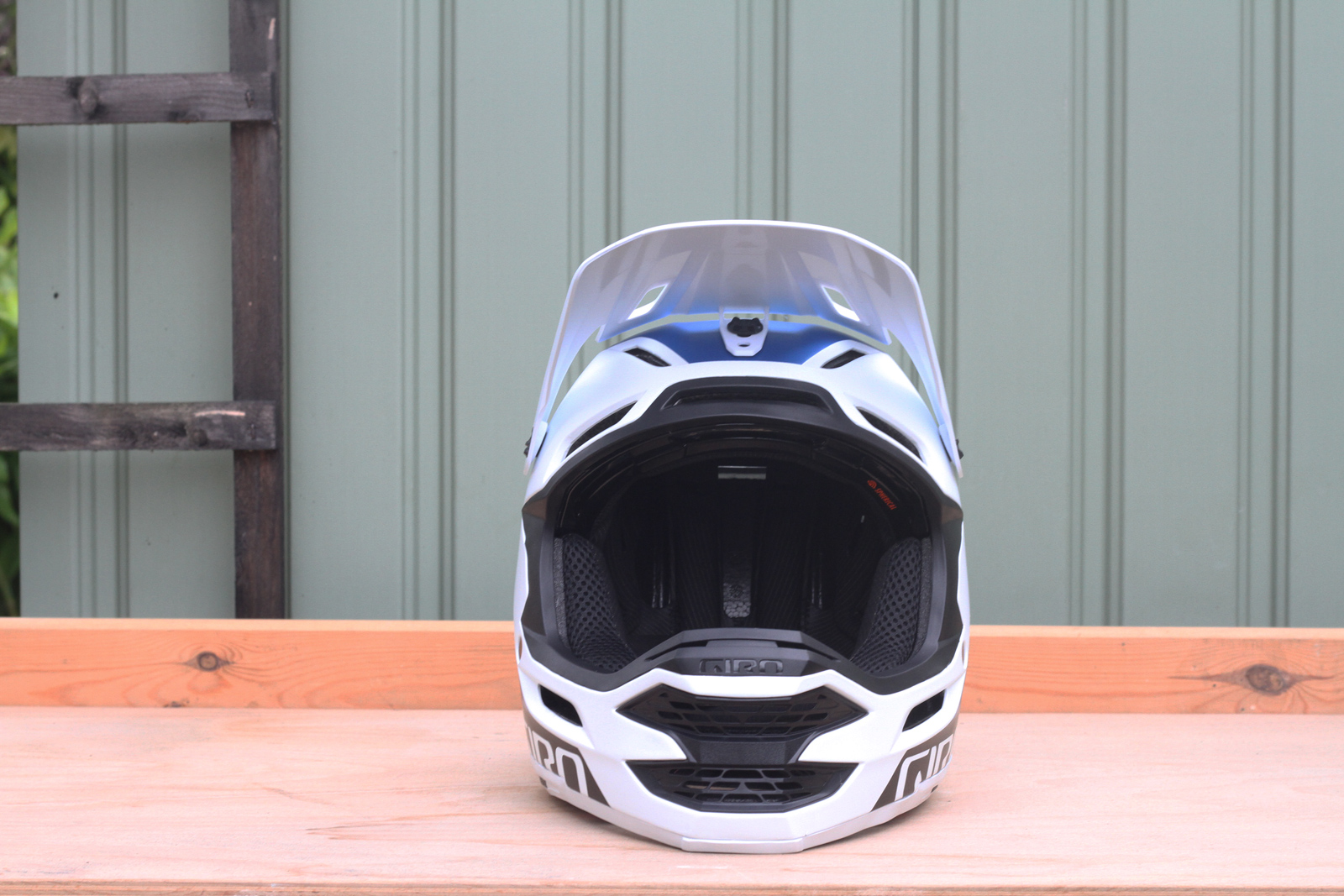 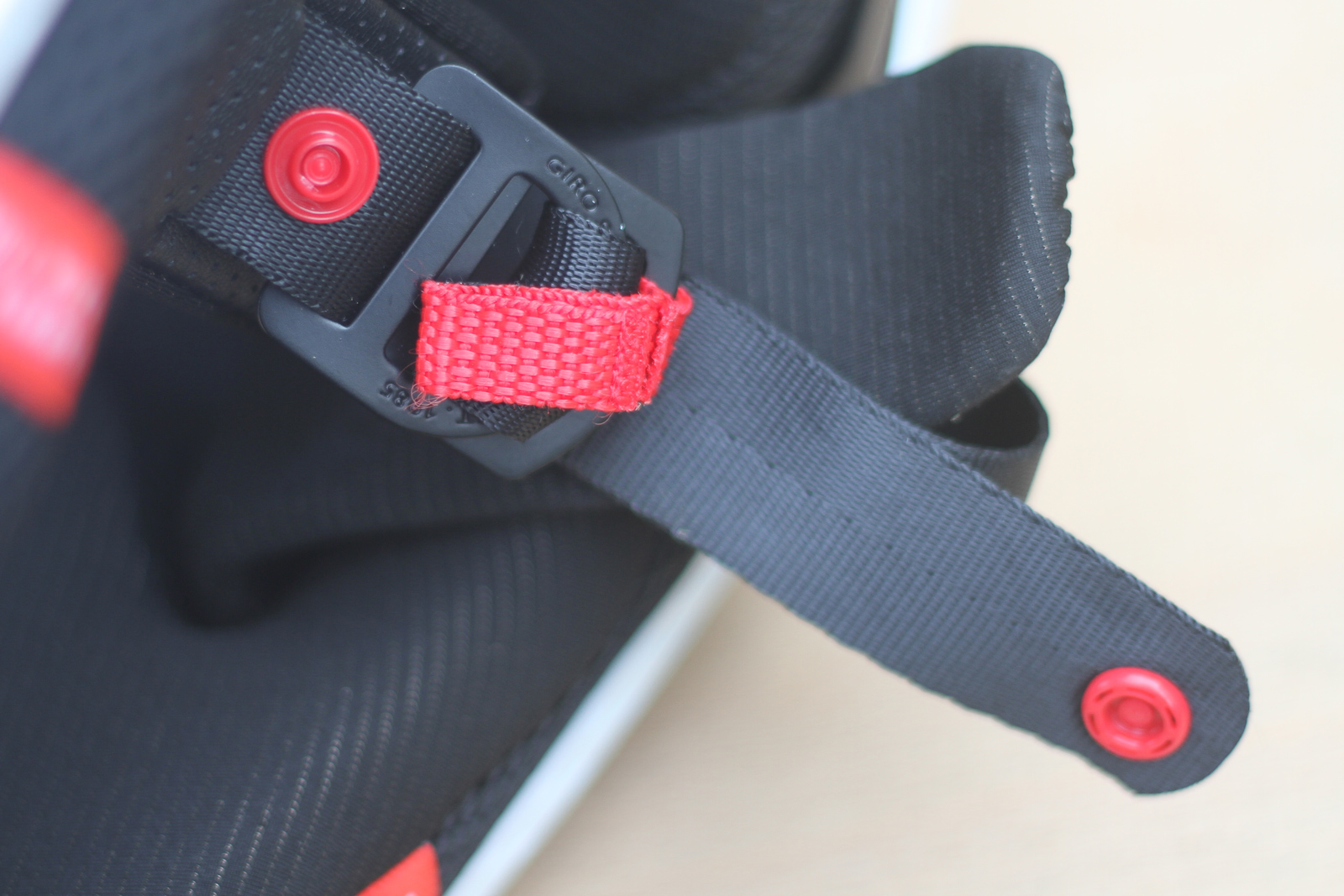 The Giro Insurgent relies on a proven Double D-Ring for closure, a feature seen ubiquitously on motorcycle helmets

The new Giro Insurgent uses Spherical Technology, an augmented version of the MIPS rotational impact protection system that is exclusive to Giro and Bell. Both owned by Vista Outdoor, the technology was developed by the company’s Advanced Concepts Group, thus the brands are able to share the Spherical Technology across their respective lines of helmets.

It comprises two layers of helmet, if you will, the inner of which is suspended by MIPS elastomers. This allows the inner layer to move independently, in any direction, with respect to the outer layer, with the total amount of displacement limited by those elastomers. During an impact, it works much the same as any regular MIPS liner, limiting the amount of rotational force that is experienced by the head.

A closer look at the Spherical Technology; on the left, the inner layer is pictured in its neutral position. On the right, I have forced the inner layer into a new position relative to the outer shell.

The difference here is that the inner layer is far more substantial; on the Giro Insurgent, that inner layer is comprised of a low density EPP foam that is said to offer more protection than higher density EPS foam in the case of low speed impacts. Handling the greater forces experienced during high speed impacts is the regular EPS foam that makes up the outer shell of this helmet.

That all sounds great for protection, but terrible for ventilation, right? Wrong, says science. 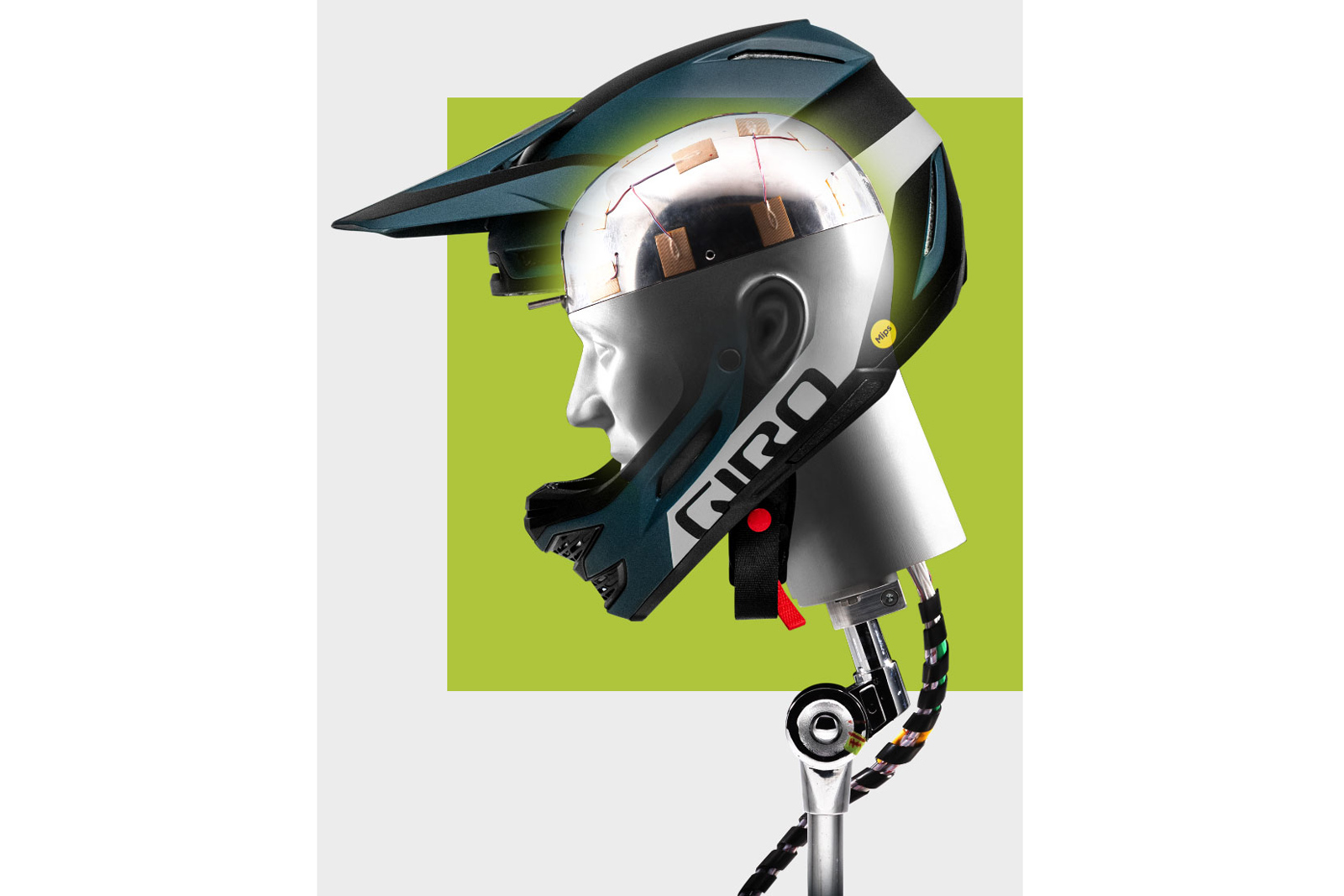 Giro put a lot of emphasis on ventilation and cooling during the design of the Insurgent. It has 20 vents, but data collected from Giro’s in-house “Therminator” suggests it is not the number of vents that is important in cooling, rather it is their size, shape and placement. The Therminator is essentially a model of a head and neck, heated to body temperature, that is covered in thermocouples. Giro use this in the wind tunnel to collect data on how the different sizes, shapes and placements of ventilation channels affect the temperature recorded at numerous locations across the head. 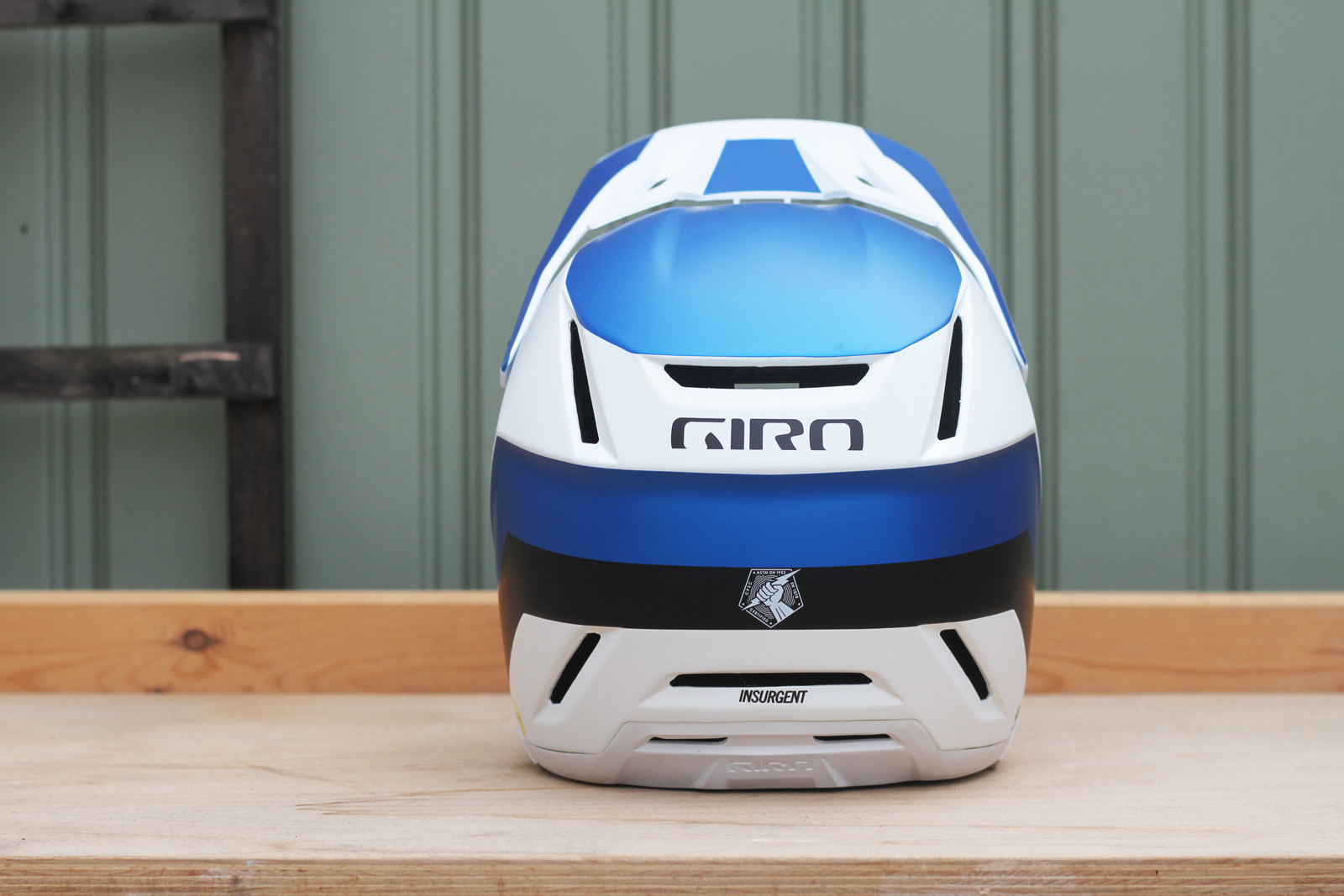 Based on data collected with the Therminator, Giro can tells us that the new Insurgent offers 50% greater cooling efficiency over their own Disciple full face helmet. The data showed the importance of exhaust vents in permitting sufficient airflow through the helmet, hence why you see no fewer than eight vents at the rear. 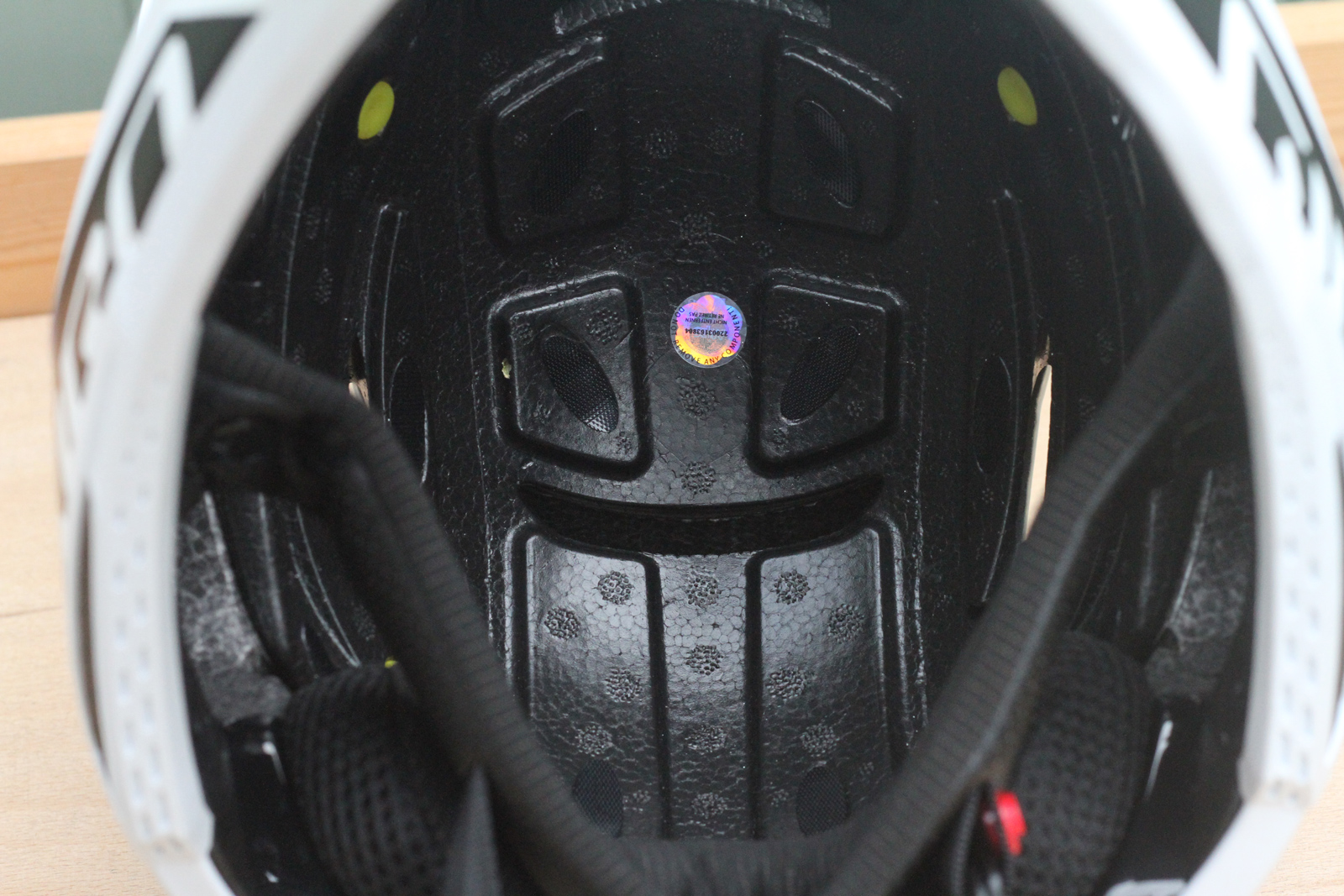 Removing the comfort liner gives a better view of the recessed channels that further encourage airflow over the wearer’s head. 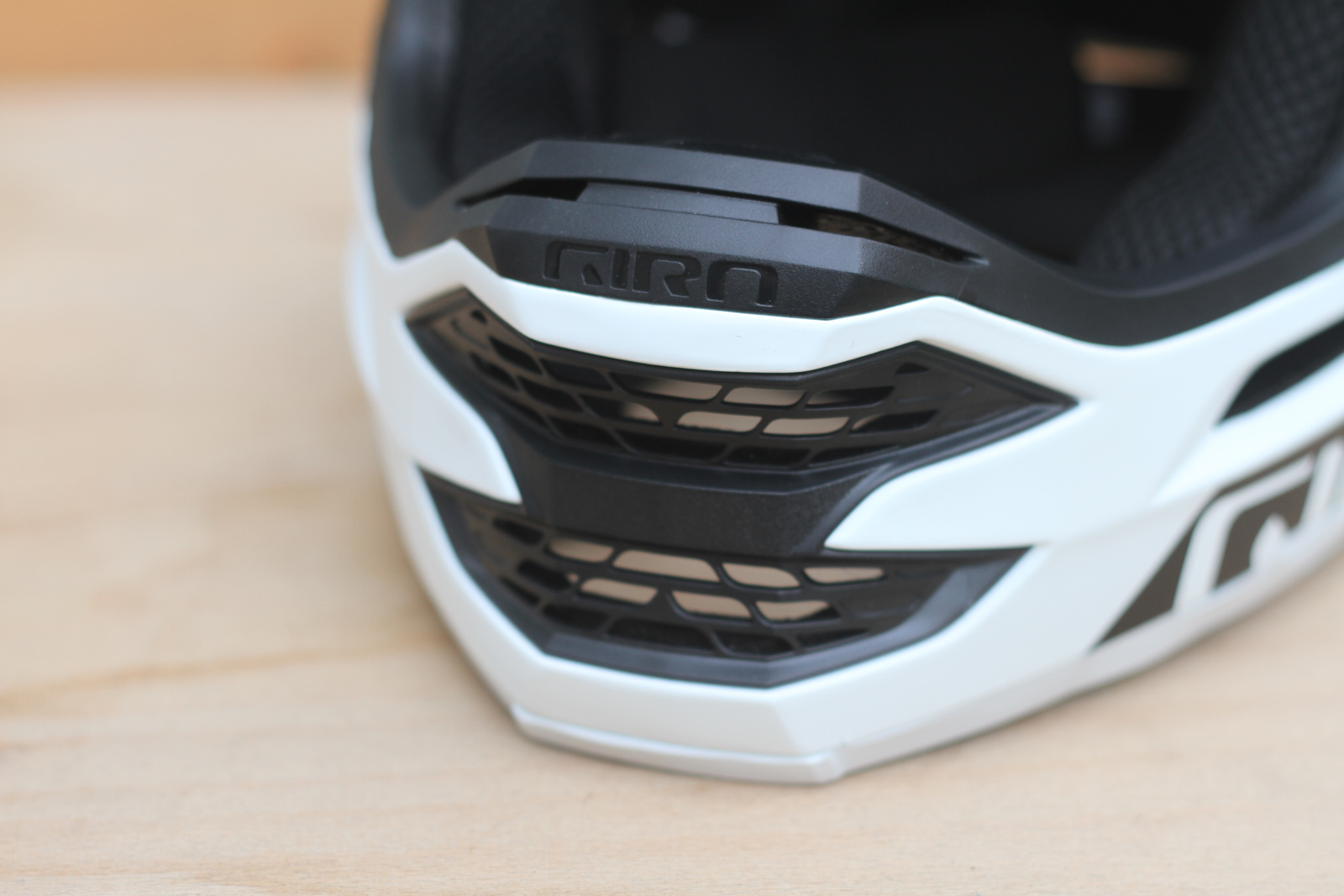 Earlier versions of the Insurgent featured mesh here, but Richie Rude wanted better ventilation in this location to help prevent his goggles steaming up 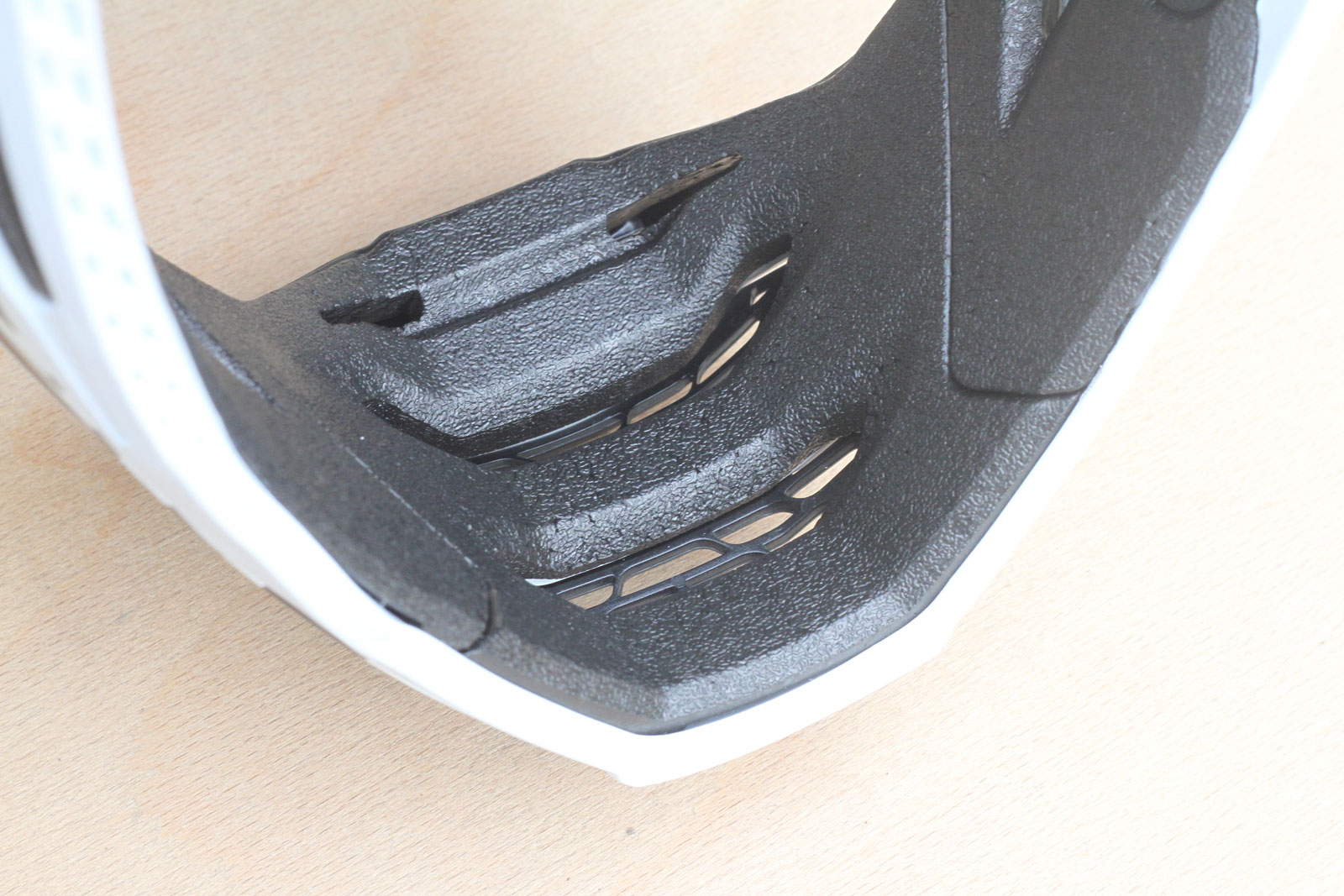 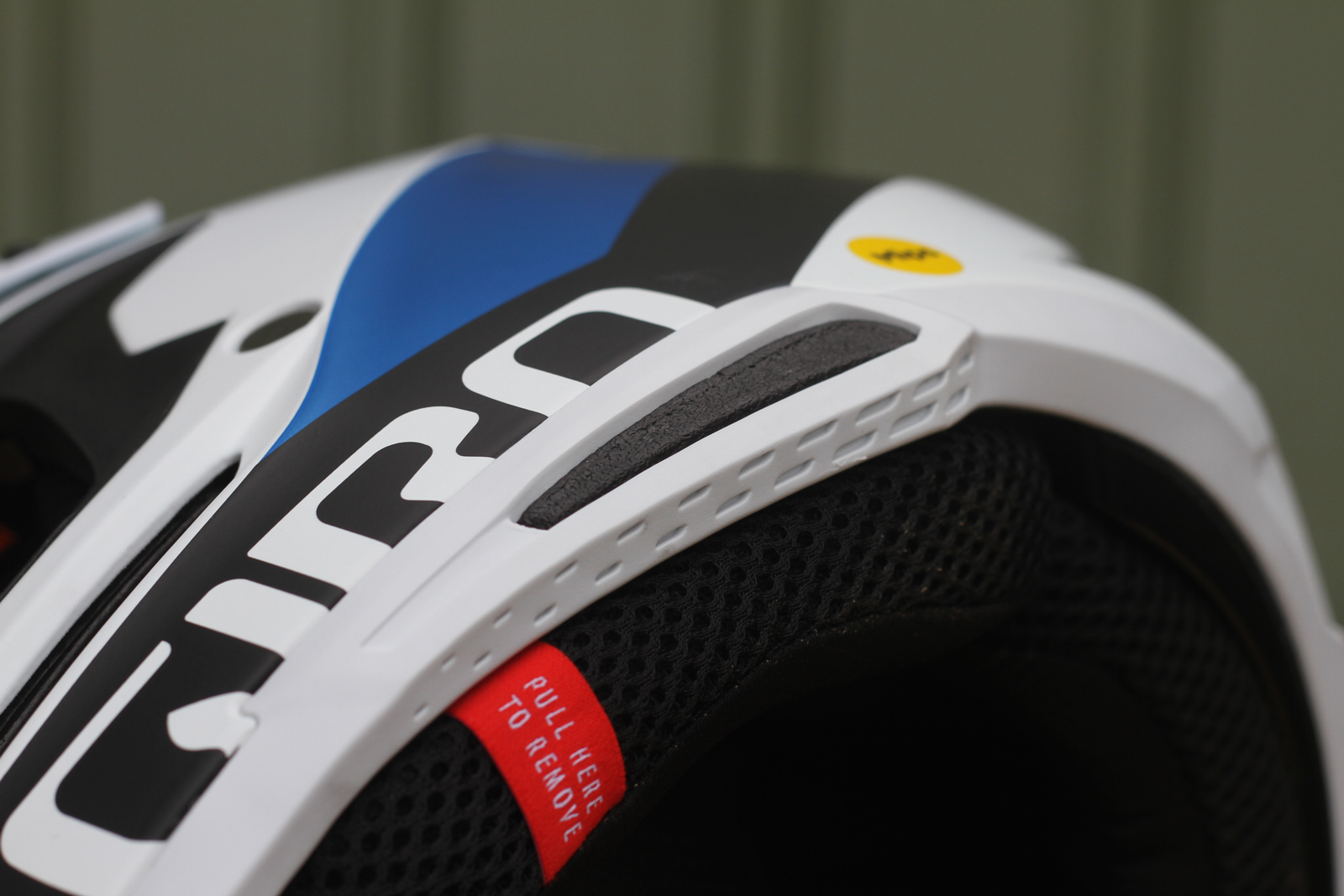 Another cool feature of the Giro Insurgent is these patent-pending flex gaskets you’ll see on each side of the chin bar. Here, the edge of the chin bar is slightly more compliant. Why? Giro reckon this could help prevent collarbone injuries that occur in certain kinds of crashes, where the helmet is forced down onto the rider’s shoulder during an impact.

A final talking point would be the Insurgent’s peak. The position can be adjusted, and locked into place by virtue of a plastic bolt. That will stop it flapping around as you descend, something that is far more likely to happen if you’ve affixed an action camera to it.

That’s all the information we can impart for now. A full in-depth review of the helmet is on its way.

The Giro Insurgent helmet is available immediately from authorized Giro retailers and the Giro website for $350 USD / €389.95 / UK £349. Each helmet is shipped with a soft drawstring bag (not shown) and a second set of thicker cheek pads. 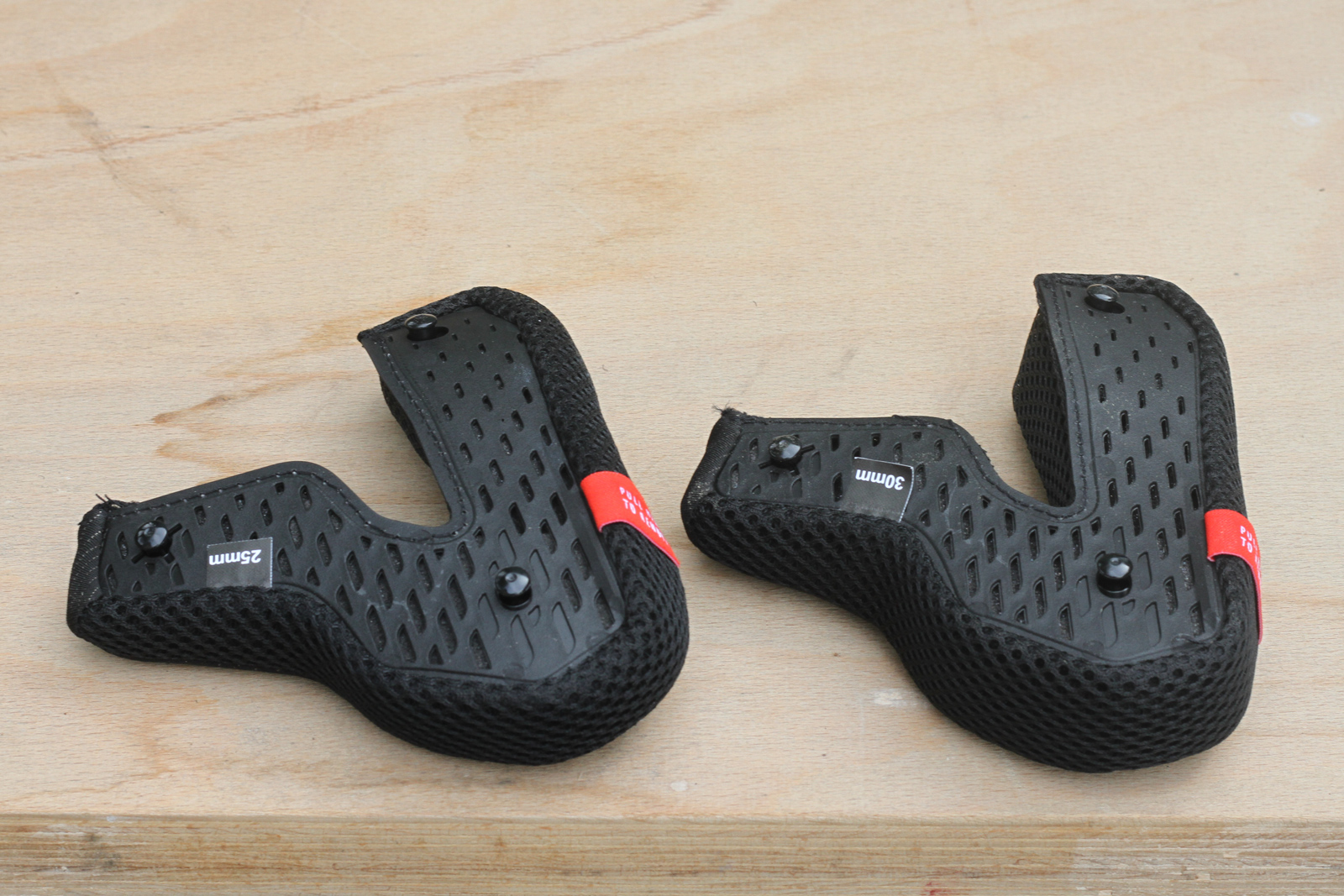 We asked Giro why our small Giro Insurgent is 112g heavier than the published claimed weight. They immediately followed up with the factory and asked them to analyze and weigh their inventory. They also asked them to disassemble 10 production Insurgent helmets of each size to give an updated materials chart that lists actual weights for all components used in the build. In this process they identified the cause of the helmet weights being out of tolerance.

“The original test samples that we certified used a single layer of base paint and a single layer of color paint on the shell. Production Insurgent helmets have been getting three layers of base paint and three layers of color paint. Although these additional layers improve durability from chips and scratches they add about 80 grams according to our engineers. In our analysis we found that the XS/S and XL/XXL helmets were the most impacted. We will be making a running change to update the decals on size XS/S and XL/XXL Insurgents. The M/L helmets were within +/- 20 grams of the weight printed on the internal decals so we are standing by our claimed weight for that size.” – Giro.

That white/blue/black is SUPER classy.